Dale Head Brings His Style and Music to APAP

Performing three showcases at the Midtown Hilton NYC - January 16th at 3 pm and midnight, and January 17th at 11:30 pm. 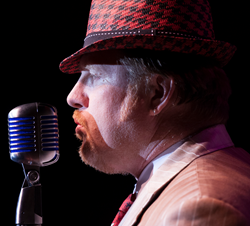 APAP is the world’s largest forum for performing arts professionals with attendees coming from all around the world, and I am passionate about my music and can’t think of a better setting to bring back the amazing songs of some of our music legends.

Dale Head (dalehead.net), a jazz and blues powerhouse vocalist and trumpet player, today announced that he will be performing his blues and jazz tunes at the Association of Performing Arts Presenters Conference (APAP) accompanied by a ten-piece orchestra. “APAP is the world’s largest forum for performing arts professionals with attendees coming from all around the world,” said Dale Head. “I am passionate about my music and can’t think of a better setting to bring back the amazing songs of some of our music legends.”

At APAP, Dale will be performing an assortment of jazz and swing hits, playing the trumpet, singing, and scatting. In the showcase, from “Voices of Jazz,” he will perform songs in the style of artists like Chet Baker, Al Jarreau, Kenny Rankin, Michael Franks, and Louis Armstrong. Dale will also feature Take Five based on All Jarreau’s live version and Sammy Davis Jr.’s version of I’m Gonna Live Till I Die. He will include two original songs from Joel Evans and two classic songs that have been arranged in a high octane version, which will be used to open and close the show. Dale will also join the horn players for a shout section, as well as doing a couple of trumpet solos.

“Over the years I have acquired some great arrangements of jazz, blues and swing tunes that I love performing,” said Head. “APAP is a great venue and I am thrilled to be performing alongside many terrific musicians.”

To learn more about Dale Head or to get more information about his performances at the Association of Performing Arts Presenters Conference, go to dalehead.net or call 530-362-1300.

About Dale Head
Dale Head is a world class vocalist who sings jazz, blues, and the Great American Songbook, with high energy and a sophisticated jazz vocal style. His work features a troupe of top notch musicians in a big band format. With a natural command of the swing and big band genre, Dale sings, plays trumpet and leads his talented group of players through a dynamic ride. With one foot firmly grounded in the foundation of the greatest music of the 20th Century, Dale is pushing the big band genre forward into the 21st Century with exciting and innovative arrangements of classic big band and American rock standards, as well as new music.

Dale’s show features hits from Joe Williams to Sammy Davis Jr., as well as Frank Sinatra and Harry James, along with some classic sounding originals and a new take on some old standards. Dale Head provides a high-powered, dynamic show that is certain to leave everyone entertained.

In addition to being an accomplished musician, Dale has spent much of his life dedicated to fighting wildfires. He has flown nearly 1,000 hours over wildfires throughout the United States. Dale also led the campaign to restore the P-3 Orion aerial firefighting fleet of airplanes and to return them to firefighting service. dalehead.net.

All trademarks in this release are the property of their respective owners.