Joe Khoury, Ph.D.’s New Book “The Ideologue: Obama’s Presidency” is About the Transformation of the U.S. Under the Obama Policies, and the Ideological Premises Thereof 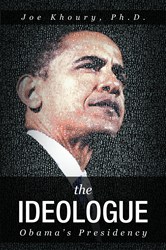 Joe Khoury, who holds a Doctorate of International Finance from the Wharton School, has completed his new book “The Ideologue: Obama’s Presidency", a gripping and informed look that makes clear that policy considerations under Obama were defined in terms of his ideological disposition instead of what is necessarily in the best interest of the country.

Dr. Khoury says, “My interest in politics stems from my commitment to keep the United States of America true to its foundational principles that inspired me to immigrate alone to the United States at the age of 19.”

Published by New York City-based Page Publishing, Joe Khoury, Ph.D’s compelling book synthesizes the ideological foundation of numerous policies that were driven by President Obama’s extreme liberalism in order to keep the base of the Democratic Party and major liberal donors in toe. Many of his policy choices were achieved by extra-constitutional methods such as Executive Orders and congressional paralysis instituted by Harry Reid. Meanwhile, the ranks of the poor, the underemployed, the too-discouraged to seek employment and those receiving food stamps rose at historical levels. Despite the most optimistic promises President Obama made, the US recovery continued anemic.

His left wing disposition left little room for cost-benefit analysis and for policies emerging from a true national dialogue. Obama Care became law without a single Republican vote. Much of the proposed legislations passed by the House of Representative were shelved by the Democrat Senate. Race relations became worse under his administration as he preferred to interfere in every case involving African-Americans while ignoring compelling facts. His decision on the Keystone Pipeline is illustrative of an appeasement policy for the left instead of one that produces jobs and energy independence for the United States.

This book will provoke much discussion, disagreements and perhaps even applause. It should, therefore, contribute to the vibrancy of democracy and to the solidity of the constitution.

Readers who wish to experience this unyielding work can purchase “The Ideologue” at bookstores everywhere, or online at the Apple iTunes store, Amazon, Google Play, or Barnes and Noble.

About Page Publishing
Page Publishing is a traditional New York based full-service publishing house that handles all of the intricacies involved in publishing its authors’ books, including distribution in the world’s largest retail outlets and royalty generation. Page Publishing knows that authors need to be free to create - not bogged down with complicated business issues like eBook conversion, establishing wholesale accounts, insurance, shipping, taxes and the like. Its roster of authors can leave behind these tedious, complex and time consuming issues, and focus on their passion: writing and creating. Learn more at http://www.pagepublishing.com.