The Birthplace of the Rocker: Ace Cafe Honored in British Customs' Legends Series

British Customs honors the Ace Cafe, the birthplace of the rocker and cafe racer subcultures, in their Legends Series on the heritage of motorcycling. 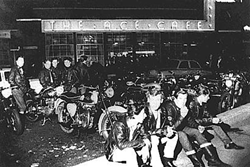 The Ace Cafe in London, where the iconic cafe racer identity was created.

British Customs, a lifestyle brand and designer of aftermarket motorcycle parts, has been connecting with the legends of motorcycling who are still with us to breathe new life into their stories and share them with today’s motorcycle riders. British Customs has been interviewing and profiling many of yesteryear’s motorcycle icons, and has been establishing an authoritative archive where these figures can live on and inspire new generations of riders.

British Customs calls this the Legends Series. The Legends Series bridges the past and the present by revitalizing the heritage of motorcycling in a fresh new way on their blog.

For riders who want their own piece of history, British Customs has built a number of custom motorcycles and developed multiple lines of products with some of the remaining legends that are true to the designs used in the heyday of motorcycling. These custom motorcycles include the Triumphant built with Eddie Mulder, the Sonny Nutter Tribute built with Sonny Nutter, the British Customs X Mule Motorcycles Tracker Classic built with Richard Pollock, and the Spirit of Gyronaut designed with the heirs of the original Gyronaut X-1 team. These motorcycles were built with parts that are publicly available, including Drag Pipes, Slash Cut TT Exhaust, Pro Builder Series Mule Motorcycles parts, the Stainless Steel Collection, and many others.

British Customs this week has added a researched and connected piece on the cradle of cafe racer culture: the Ace Cafe.

The Ace Cafe was built in 1938, and underwent several reconstructions due to expansion and World War II. Following the war, road traffic was up, rock ‘n roll music appeared, and the teenager phenomenon was created. But rock ‘n roll wasn’t played on the radio, only on the jukeboxes of such greasy spoon diners such as the Ace Cafe. The Ace Cafe was located on one of the arterial highways of the area, and was accepting of the growing rocker and cafe racer culture, making it a hub for the Ton Up Boy lifestyle and such groups as The Fifty Nine Club.

The motorcycles the original cafe racers rode, as did every other daredevil, stuntman, racer, and even the common rider, were all street bikes that had been stripped down and modified for any purpose wanted. In step with this, British Customs published a series of style guides to help riders inspired to transform any Triumph Modern Classic including the iconic Bonneville, Thruxton, Scrambler, and other into a tracker, cafe racer, dirt bike, desert sled, bobber, resto-mod, and other styles.

Each week, British Customs will publish at least two pieces on their blog to continue growing their archive on the racers, events, personalities, machines, and events that created the heritage of today’s motorcycle community.

Anyone interested in using or viewing the archival images and documents British Customs is digitizing is encouraged to contact them.