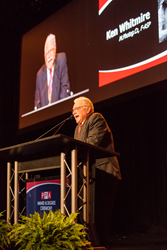 It's amazing that an association of 29,000 photographers, that they and their elected representatives chose me for this award...it represents the pinnacle of my career.

Professional Photographers of America (PPA) photographer Kenneth L. Whitmire, M.Photog.Cr., F-ASP, was awarded PPA's Lifetime Achievement Award during the Award & Degree ceremony at Imaging USA 2016. Whitmire is only the fourteenth photographer to receive the honor. Whitmire has served as a Board Member of PPA and holds the Professional Photographers of America Master of Photography Degree and Photographic Craftsman Degree.
"Since 1949 most of my time has been spent trying to better the 'prestige factor' of photography," Whitmire said, reflecting upon winning the Lifetime Achievement Award. "When I saw that sculpture, it's absolutely amazing. I thought ... this is serious stuff!
Mr. Whitmire is no stranger to the serious stuff. The award adds to an impressive list of achievements for the Yakima, Washington photographer, who has been awarded over 100 photographic trophies, including, most recently, Washington state’s 2015 Best Portrait Award. He has been awarded the Eastman Kodak National Academy Awards Grand Prize, the Professional Photographers of America Gerhard Bakker National Education award, and the ASP Honorary Fellowship.

Whitmire has judged and presented programs at the national, regional, and state level as well as Canada, Australia, New Zealand, China, Great Britain, and the Philippines. He has traveled to and photographed over 22 countries in all corners of the globe. In 1987 he assisted with the leadership of the first recorded professional photographer's cultural exchange tour of China, representing the International Committee of the Professional Photographers of America. The PPA Lifetime Achievement Award was presented to Mr. Whitmire by PPA President Michael Timmons, M.Photog.M.Artist.Cr., CPP, F-ASP.
Whitmire explained how the award makes him feel "extremely appreciated" and continues, "It's amazing that an association of 29,000 photographers, that they and their elected representatives chose me for this award...it represents the pinnacle of my career."

About Imaging USA:
Imaging USA is the longest-running international photographic convention, expo and image exhibition in the world. The event dates back to 1880, when it began as the annual convention and tradeshow for Professional Photographers of America (PPA). More than 10,000 photographers descended upon Atlanta for three days of photography education and inspiration as well as some exclusive photography-related shopping. For more information, visit ImagingUSA.org.