Be Among the First to Hear the Incredible Solo Album of the Soulful Singer from Vocal Super Group “The Edge Effect” on iTunes, Google Play, CDBaby and More 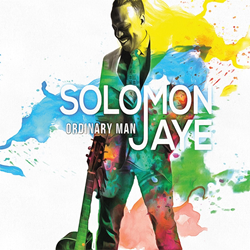 “Ordinary Man is the culmination of my time living in New York,” says Jaye. “Everyone can relate
to having a difficult job, falling in and out of love and just trying to make something out of your everyday existence. It’s a tribute to my appreciation of 50s, 60s and 70s music. Each song pays homage in its own way while lyrically and vocally holding onto a contemporary pop sensibility. While the recording quality is pristine, we went for raw, candid emotion over perfection. This album sets the mood for any occasion. It’s about love, happiness and pain in relationships and life in general.”

Album highlights include:
“Ordinary Man” – Blues inspired title track charting the relatable story of a day in the life of the average man with Jeff Babko shining on organ.

“TOTGA: The One That Got Away” – Featuring a non-traditional rhythmic style detailing the story of being close to something that feels right and having it slip through your fingers. Guitarist Justin Smith and drummer Jamey Tate lend their talents to the track.

“Turn It Up” – The tale of love at first sight told with a James Brown vibe and powerful horn section.

“I Get the Sweetest Feeling” – Jaye’s original rendition of the popular Jackie Wilson tune with his own memorable acoustic blues treatment.

31-year-old singer, songwriter and talented tap dancer Jaye has over a decade of distinguished musical highlights, which include performing with winners of MTV’s “Top Pop Group,” Boyz II Men's "Next Great A Cappella Group" and “America's Got Talent” finalists The Edge Effect, premiering a solo show on the world’s largest cruise ship Oasis of the Seas, taking center stage in “Hairspray: The Musical” for Royal Caribbean, opening for Robin Thicke and Sky Blue (LMFAO) at the Florida SunFest Music Festival.

Currently, Jaye resides in Ft. Lauderdale, FL, recently returning to the Sunshine Stage after spending the last several years in New York City. Born in Tampa, FL, raised in Houston, TX and attending college in Georgia and Oklahoma, Jaye’s roots are reflected in the soulful “ol skool” style and songs of Ordinary Man.

“This project has been almost a year in the making,” says Jaye. “I’m so proud of these recordings. Of everything I’ve done, collaborations included, this is the best, fullest representation of my ability as a singer, songwriter, guitarist and arranger. I’m so excited to share this modest piece of art with the friends, family and fans who have supported me all this time. Hopefully, this will inspire countless new ones as well.”

Get your copy of Ordinary Man for just under $7 now available on multiple digital platforms, including:
iTunes: https://itunes.apple.com/us/album/ordinary-man/id1066027479
Google Play: https://play.google.com/music/preview/Bh32at5z5mxzz2mlt5ubrcwdxki
CDBaby: https://www.cdbaby.com/cd/solomonjaye4