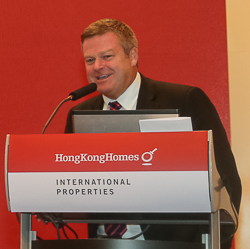 “This is potentially one of the most exciting and original developments being delivered in the UK today.” - Peter McInnes, North Point Global

The £200 million project is expected to be completed by mid-2017 and includes plans for 850 new homes, businesses, leisure facilities, a hotel and a Chinese shopping area. It will also see the transformation of a largely derelict land which is set in the heart of Liverpool Chinatown and spans over two hectares.

Chairman of North Point Global, Peter McInnes said “This is potentially one of the most exciting and original developments being delivered in the UK today.”

Lauded as one of the best Chinatown’s in the UK, Liverpool has seen a massive overhaul in urban regeneration over the last decade and McInnes’ team are now tasked with bringing a much beloved area of the city to life in this last phase of creating the much discussed Northern Powerhouse. Liverpool’s Chinatown can be traced back as early as the 1800’s and McInnes’ North Point Global firm is set to continue the development of the city centre that has seen the waterfront and main inner city shopping areas develop to be tourism magnets in the last ten years.

McInnes and his team will responsible for the development which will not only see urban regeneration at its heart, but a diverse and high quality city centre living and working community which will also focus on developing the tourism trade as well as creating a unique Chinese retail core leisure destination in the form of a “Chinese themed Bazaar” situated within a sunken street.

Hailing as the oldest in Europe, the redevelopment of Liverpool’s Chinatown set out by McInnes and his team has seen support from all quarters responsible in the regeneration of one of the city’s most loved city centre areas. "We have also had fantastic support from the city council's planners and politicians who have shown incredible resolve to support the delivery of this transformational vision for Chinatown. I would also like to thank organisations and businesses in Chinatown who have provided support, advice and encouragement during the design and planning phase."

North West developer, Peter McInnes and his North Point Global firm aren’t new to urban regeneration around the city of Liverpool. Their Pall Mall development in the Pumpfields area of the city will see the creation of “366 residential units, a 516-space multi-storey car park, offices, a ground-floor retail unit, plus a gym and spa.”

Speaking of the Chinatown redevelopment, McInnes said “New Chinatown will be creating a city within a city, creating a destination of international scale and appeal.”