Heidelberg Instruments announced the sale of a Maskless Aligner MLA150 to the Kirchhoff-Institute for Physics at Ruprecht-Karls University Heidelberg, located in Heidelberg, Germany. 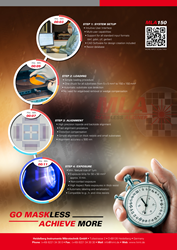 The Maskless Aligner MLA150 will become the central lithographic tool of the cleanroom facility of the Kirchhoff-Institute for Physics in Heidelberg.

Heidelberg Instruments announced the sale of a Maskless Aligner MLA150 to the Kirchhoff-Institute for Physics at Ruprecht-Karls University Heidelberg, located in Heidelberg, Germany.

The MLA 150 system will enable the user to expose micron-sized structures on photoresist, with an active write area of up to 150 mm by 150 mm.

“The Maskless Aligner MLA150 will become the central lithographic tool of the cleanroom facility of the Kirchhoff-Institute for Physics in Heidelberg. This facility is used by several in-house research groups developing cutting-edge superconducting and semiconducting devices for a variety of applications. These include magnetic calorimeters combing the high resolution of crystal spectrometers and the large energy bandwidth of semiconductor detectors, superconducting quantum interference devices which are presently the most sensitive wideband devices for measuring physical quantities that can be naturally converted into magnetic flux as well as highly-specialized silicon-based photo detectors, so called SiPMs, which will be used for several particle physics and medical applications.“ states Dr. Sebastian Kempf, group leader of the “Superconducting Electronics” group of the Kirchhoff-Insitute for Physics.

About Kirchhoff-Institute for Physics, Ruprecht-Karls-University Heidelberg: Founded in 1385, Heidelberg University is the oldest university in Germany. It is one of the strongest research universities and in 2007 received the status of an official elite university in Germany. Research and education covers a wide range of subjects including all traditional university fields. It has an annual budget of over 400 million Euros, about 600 professors and in total over 11 000 employees. The Kirchhoff-Institute for Physics (KIP) of Heidelberg University, founded in 1999, aims to continue the tradition of diverse scientific research and education of his eponym Gustav Robert Kirchhoff who worked in Heidelberg for 21 years. Therefore, KIP covers several diverse research fields such as neuromorphic hardware, biophysics, solid-state physics, particle physics as well as detector development for a large amount of different applications.

About Heidelberg Instruments, GmbH: With an installation base of over 600 systems in more than 50 countries, Heidelberg Instruments Mikrotechnik GmbH is a world leader in production of high precision maskless lithography systems. Due to their flexibility, these systems are used in research, development and industrial applications for direct writing and photomask production by some of the most prestigious universities and industry leaders in the areas of MEMS, BioMEMS, Nano Technology, ASICS, TFT, Plasma Displays, Micro Optics, and many other related applications.