Turks & Caicos Islands has been named a "top Caribbean island in 2016" by Caribbean Travel & Life Magazine while Grace Bay Beach, also on the island of Providenciales (Provo) was named the Caribbean's top beach. The Tuscany Resort, a boutique resort on Grace Bay beach is celebrating this amazing news with a new spring promotion. 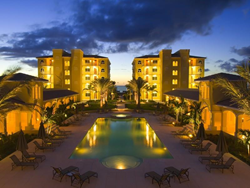 "We are honored to be the #1 resort out of 44 resorts on the island of Provo by TripAdvisor" Terria Misick, Resort Manager

Caribbean Travel & Life Magazine, in conjunction with Islands magazine, conducted a 2015 Best of the Caribbean survey. More than 20,000 readers weighed in on their favorite destinations and Turks & Caicos was voted #6 overall, #3 for Families and best of all, Grace Bay Beach was given the honor of the #1 best beach. As a top island in the Caribbean, Turks & Caicos ranked among celebrated travel spots such as St. Lucia, Aruba and the Cayman Islands, and the US Virgin Islands.

"We love the fact that Turks & Caicos and Grace Bay Beach are receiving so many awards from travelers, but moreover, the Tuscany Resort feels very honored to be the #1 resort out of 44 resorts on the island by TripAdvisor," says Terria Misick, General Resort Manager.

This newest recognition comes after Grace Bay Beach was voted the #2 beach in the Caribbean for weddings, according to the Caribbean Journal, and after Grace Bay was ranked as the #2 beach in the world by TripAdvisor earlier in 2015. The island of Providenciales itself received a TripAdvisor Traveller's Choice Award in 2015 as the top island in the world.

With all of these amazing accolades, The Tuscany Resort, voted #1 resort out of 44 resorts on Provo, by TripAdvisor, is celebrating by offering 2016 promotions starting April 15 and running through December 18, 2016. Guests who book stays at the boutique resort on Grace Bay beach will enjoy every fourth and every seventh night complimentary.

As an additional promotion, the Tuscany is offering guests who travel between September 1 and October 31, 2016, 40% off rack rates on all one, two, and three bedroom villa rentals.

These special promotions are offered on all new reservations. For more information, call (toll free) 1-866-359-6466.

About The Tuscany Resort

Located just 15 minutes from Providenciales International Airport, The Tuscany on Grace Bay in Turks & Caicos, offers the ultimate in luxury and privacy. Each of the thirty oceanfront villas has a distinct ambiance and decor. The Tuscany Resort is a wonderful getaway for couples, honeymooners and families. It sits on a very private and pristine stretch of Grace Bay beach yet close to everything one would want to do on the island. For more information, call 1-866-359-6466 or email info(at)thetuscanyresort(dot)com, or visit http://www.thetheTuscanyResort.com.

All Tuscany oceanfront condos have screened in patios for beautiful views.

All of the Tuscany condos have a different decor and ambiance.

Most oceanfront condos at The Tuscany have a king bedroom room, queen bedroom, and set of twins.

The Tuscany Resort sits on a very private and pristine stretch of Grace Bay beach.