Quark Expeditions® is excited to announce that astronaut Colonel Chris Hadfield will bring his Generator Show to the Arctic. 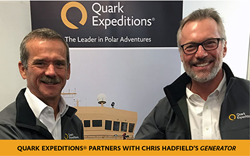 “This is the ultimate earthly adventure, where real learning happens”

Quark Expeditions®, the leading provider of polar adventures to the most remote regions on the planet, is excited to announce that astronaut Colonel Chris Hadfield will explore the Arctic and Greenland on its Arctic Icebreaker Expedition: Best of the Canadian High Arctic voyage in 2016 in true expedition style on the legendary icebreaker, Kapitan Khlebnikov. This voyage is the third of four separate journeys, which together culminate in a historic, full circumnavigation of the Arctic. “Chris Hadfield’s Generator” is a science based variety show that blends knowledge, perception, music and comedy, hosted by the celebrated astronaut and featuring special guests, presenting Quark passengers with awe-inspiring insight to self-discovery through the lens of exploration.

The group will board the iconic soviet icebreaker Kapitan Khlebnikov, and explore Greenland’s stunning west coast and the Canadian Far North. Video shows the Khlebnikov’s incredible ice-crushing capacity, and its ability to reach sometimes inaccessible landing sites. Hadfield and his team will have the opportunity to experience the Greenlandic fishing village of Sisimiut, spectacular Ilulissat Icefjord, Cobourg Island’s sprawling bird cliffs, and historic Beechey Island.

Hadfield, an engineer and former Royal Canadian Air Force fighter pilot, is best known and much respected for his 35-year career as an astronaut. The first Canadian to walk in space, he’s flown two space shuttle missions and served as the first Canadian commander of the International Space Station.

“This is the ultimate earthly adventure, where real learning happens,” Hadfield said. “To go to the edge of our understanding, at the frontier of where technology can take us onboard a ship with the capabilities of this icebreaker, with a group of people that have trained together, is almost like a space expedition of its own.”

Andrew White, Quark Expeditions® President comments, “We’re absolutely thrilled to welcome Colonel Hadfield and his show “Generator” on a leg of our Arctic Circumnavigation. It’s so fitting that one of the world’s most loved modern adventurers will have the chance to explore the paths of explorers from days gone by on board icebreaker Kapitan Khlebnikov. It’s an extreme adventure befitting one of the most adventurous men on the planet.”

About Quark Expeditions®:
Specializing in expeditions to the Arctic, Antarctic and sub-polar regions, Quark Expeditions® has been the leading provider of polar adventure travel for 25 years. With a diverse fleet of specially-equipped small expedition vessels, icebreakers, and unique land-based adventures, it offers travelers unparalleled access to the most remote places on earth. Led by passionate and seasoned expedition teams, including scientists, naturalists and researchers, the on-board program focuses on guest interaction to educate and enrich the passenger experience. The company is known for its unwavering commitment to safety and sustainability, and was the first to offer passengers — free of charge — carbon-neutral voyages in Antarctica aboard the Ocean Diamond.