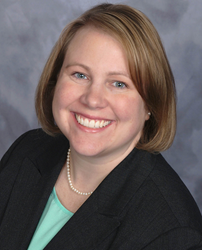 Danielle is the consummate title professional. Her underwriting approach is thorough, yet appropriate for getting the deal closed while protecting parties and the underwriter.

Danielle L. Kaiser has joined North American Title Insurance Co. (NATIC) as its vice president, regional underwriting counsel for the Eastern region. Initially focusing on Indiana and Ohio, Kaiser will eventually also support NATIC agents along the Eastern Seaboard and into the South.

“Danielle is the consummate title professional,” said Valerie Jahn-Grandin, executive vice president, NATIC chief underwriting counsel. “Her underwriting approach is thorough, yet appropriate for getting the deal closed while protecting parties and the underwriter. In addition, Danielle understands the critical need to take an active role in developing legislation and compliance matters, and is most successful in such a role.”

Kaiser is a member of the Indiana Land Title Association (ILTA), served in 2012 as its president and currently serves as chair of its Government Affairs committee. She has presented various ILTA title professional seminars, provided Lobby Day legislative updates and spoken at numerous industry forums. Kaiser also holds the prestigious National Title Professional designation from the American Land Title Association.

“Danielle will be part of NATIC’s growth across the country,” added Jahn-Grandin. “We plan to use her skills to benefit all our agents, regardless of jurisdiction. She will take an active role in agent training on TRID issues as well as broader underwriting issues. As a person who understands agents and enjoys tackling their problem transactions, Danielle welcomes a relationship that involves training and moving that agent to the next level – helping that agent grow and develop to their full potential.”

“I have built great relationships with agents through my work in underwriting and also through involvement in industry associations,” said Kaiser. “I’m impressed with NATIC’s approach to title insurance and pleased to be part of a team that seeks growth and opportunities.”