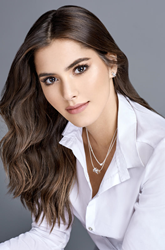 "Now I have the opportunity to contribute through this wonderful organization that is Stop Hunger Now. I'm living one of my biggest dreams, helping end world hunger."--Paulina Vega

Paulina Vega, Miss Universe 2014, has taken on the role of Global Food Security Ambassador, raising awareness of the need to end hunger.

Now that Paulina Vega has turned over her crown to the new Miss Universe title holder, she will transition to her new role as Global Food Security Ambassador for Stop Hunger Now, an international nonprofit that works to end hunger by providing food and life-saving aid to the world’s most vulnerable.

“Now I have the opportunity to contribute through this wonderful organization that is Stop Hunger Now,” says Vega, “I feel so fortunate to be a part of it. I’m living one of my biggest dreams, helping end world hunger. The only thing I regret, is that I didn't start sooner.”

As Global Food Security Ambassador, Miss Vega’s role will be to create awareness of the need to end hunger in our lifetime. Activities will include:

Founded in 1998, Stop Hunger Now has delivered aid and disaster relief supplies in the form of food, medical supplies, clothing, school supplies and more to thousands of disaster victims and other hungry and vulnerable people in 73 countries. For more information, visit http://www.stophungernow.org.

About Paulina Vega
Paulina Vega of Colombia was crowned Miss Universe 2014 at the 63rd Annual MISS UNIVERSE® Pageant in January 2015. She is the second Colombian woman to take home the Miss Universe crown.

About Stop Hunger Now
Stop Hunger Now works to end hunger by providing food and life-changing aid to the world’s most vulnerable people, and by creating a global commitment to mobilize the necessary resources. Based in Raleigh, N.C., Stop Hunger Now operates meal packaging programs in 20 U.S. cities and in South Africa, Malaysia, India, Italy, Peru and the Philippines. For information, visit http://www.stophungernow.org.