Black Clover, a premium lifestyle brand, is sponsoring it's first PGA event as well as sponsoring two of the participating golfers. 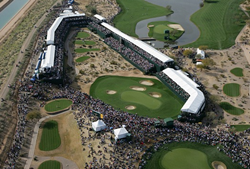 The Waste Management Phoenix Open is a prestigious tournament featuring some of the greatest players in the country. We’re excited to watch Kyle do what he does best.

Reifers’ participation this year marks his second straight year playing in the tournament and also marks one of his first tournaments after being sponsored by premium lifestyle brand, Black Clover.

“Kyle is a fantastic player and we’re lucky to be headed to Phoenix to support him,” said Black Clover President of Global Branding, Brett Wayment.”The Waste Management Phoenix Open is a prestigious tournament featuring some of the greatest players in the country. We’re excited to watch Kyle do what he does best.”

The tournament will be broadcast nationally on television on The Golf Channel—Thursday and Friday—and on NBC—Saturday and Sunday. In addition, the daily pairings with tee times will be posted on the PGATour.com website.

For more information regarding event details, how to participate, or the other players in the tournament, please visit the 2016 Waste Management Phoenix Open official website.

About the 2016 Waste Management Phoenix Open

The Phoenix Open—self-proclaimed as The Greatest Show on Grass—was first played in 1932 and has since grown to become a part of the PGA TOUR’s FedExCup and attract an annual audience of over 550,000 live participants. With more than $86 million raised for Arizona charities, countless individuals and groups have benefited from the monies raised through the Waste Management Phoenix Open.

Formed in 2008, Black Clover has established itself as a premium lifestyle brand with a vision rooted in choosing to live life to the fullest—choosing to LIVE LUCKY!™ To Black Clover, “living lucky” means creating the highest quality hats, clothing, and lifestyle accessories currently available to the sports, outdoors, and poker industries. Designing apparel that inspires individuals to enjoy life and embrace every day, Black Clover is dedicated to men, women, and children everywhere who want to LIVE LUCKY!™ For more information, visit http://www.BlackCloverUSA.com.