Former President and CEO, Joel M. Gerstel who passionately served the Parkinson’s community for more than 30 years, passed away on January 21, 2016 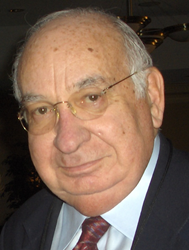 The American Parkinson Disease Association (APDA) Board of Directors approved the development of a Research Fund to be named in memory of Joel M. Gerstel, its former President and CEO who served the organization and the Parkinson’s community as a national board member and then as its Chief Staff leader for over 30 years.

“The legacy that Joel leaves to APDA and the Parkinson’s community is unmatched,” explains Leslie A. Chambers, APDA President and CEO. “His tireless devotion and dedicated service to improve the quality of life for those living with this disease along with his relentless efforts to support critical research continues to touch us all deeply today. This Research Fund will be one small way to keep his memory alive and pay tribute to all he has done to change the landscape of Parkinson’s.”

The catalyst that initially brought Mr. Gerstel to APDA in the 1980’s was his brother-in-law’s Parkinson’s diagnosis. As Joel watched him gradually diminishing, he wanted to do something to help him and others like him. Ironically, in 2012, Mr. Gerstel was diagnosed with Parkinson’s syndrome, which results in many symptoms of Parkinson’s without a diagnosis of the disease itself.

Prior to assuming the position of Director of Operations in 1995, Mr. Gerstel served as a member and officer of the APDA Board of Directors for ten years. In 1997, he was named APDA’s Executive Director and in 2011 was appointed President and CEO. Additionally, Mr. Gerstel was appointed to represent the Parkinson’s disease community in 2003 on the Transportation Security Administration’s Disability Coalition, a division of the U.S. Department of Homeland Security. Mr. Gerstel retired in 2013.

Joel is survived by his wife, Deanne, two children, Jeffrey and Sharon and three grandchildren. Our condolences to his family on behalf of all the families he faithfully served.

Donations to the Joel M. Gerstel Research Fund can be made here.