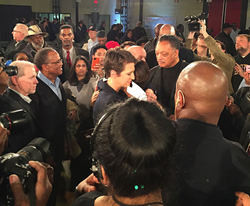 The Flint, Michigan water crisis is a water contamination crisis that began in April 2014. After the change in source from treated Lake Huron water to the Flint River, the city's water had a series of problems that culminated with lead contamination, creating a devastating public health danger. The corrosive Flint River water caused lead from aging pipes to leach into the water supply, causing extremely elevated levels of lead in up to 12,000 residents, who experienced a wide range of health issues.

The meeting was attended by thousands of Flint residents and prominent national community organizers and local leaders.

According to Stern, the town hall shined a bright national light on the crisis including the failure to fix the problem to prevent further harm. It served as a platform for community leaders to provide substantive information to Flint residents regarding how to deal with the physical and emotional damage that has been permanently inflicted on their children, and for members of the community to voice their emotions, primarily outrage, over what the state government has done to permanently harm them and has not done to mitigate the damage or correct the problems.

Stern also noted that local residents universally expressed the sentiment that their state government officials were incapable of addressing the devastation in a meaningful way and that the federal government, with the assistance of city officials should be tasked with solving the crisis, including determining how to spend government funds for Flint residents and the victims.

Another observation by Stern was that residents and community leaders expressed that while the state government has a money surplus in a "Rainy Day" fund, not a dime has been allocated to replacing the corrosive pipes that remain in place as a conduit from the water supply to Flint homes. Nor has a single dollar been allocated to assist the children of Flint and their families in dealing with the far-reaching health issues, including the severe learning disabilities that come with lead poisoning. And while the water source has been switched to one that is safe, the damage that was done by the unsafe water to the infrastructure of the piping in the system largely remains, making it impossible still for residents of Flint to use water in their homes.

"Lead impacts everybody, absolutely everybody - adults, seniors, pets," Dr. Hanna-Attisha said. "We need to get the resources to get interventions in place for the entire exposed period."