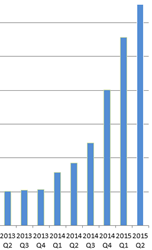 KnowBe4’s security behavior platform is rapidly becoming a ‘need to have’ for businesses.

KnowBe4 Inc., the industry-leading security awareness training and integrated phishing platform, today announced it has closed an $8 million round of Series A funding led by Elephant, a new venture capital fund co-founded by Jeremiah Daly and Warby Parker co-founder Andy Hunt. Daly was previously on the board of well-known security leader Malwarebytes. The Series A financing builds on an excellent growth year for KnowBe4 which has seen annual growth of over 350% and consecutive growth for a record 10 straight quarters, with an impressive 950% growth rate since 2011.

KnowBe4 helps IT pros to manage the problem of social engineering, training users to recognize red flags, utilizing a robust platform of tools that enable IT to send simulated phishing emails to users who can be given immediate world-class training by famous reformed hacker Kevin Mitnick. Users can also use a KnowBe4-provided Outlook Phish Alert Button to send any suspicious email to IT in a safe manner. This gives IT an added “human firewall” layer of defense and contributes to a strong security culture.

As the proliferation of high profile and damaging hacks grows, security awareness training has gone from the lunchroom to the boardroom in priority, exceeding a billion in worldwide annual revenue per Gartner.

“KnowBe4’s security behavior platform is rapidly becoming a ‘need to have’ for businesses. IT security spending has historically focused on protecting networks and endpoint devices but largely ignored protecting end users through simulation and education, leading to a large increase in damaging socially-engineered attacks,” said Jeremiah Daly, partner at Elephant. “We invested in KnowBe4 because of their team’s unmatched expertise and strong traction in delivering value to customers in this fast-growing market. KnowBe4’s product set helps organizations vastly improve their security posture and mitigate risk.”

A data security expert with more than 30 years in the IT industry, KnowBe4’s Founder and CEO, Stu Sjouwerman, was the co-founder of Sunbelt Software, a multiple award-winning anti-malware software company that was acquired 2010.

“We are growing substantially and are pleased to have additional funds to fuel our expansion at an accelerated velocity,” said Sjouwerman. “Outpacing innovation from cyber criminals is a daunting task and we are committed to
doing our part to help our customers manage by improving their own security culture with effective training,” he added.

Lloyd’s of London estimated cybercrime costs businesses as much as $400 billion a year, a staggering amount by any standard. This doesn’t take into account hacks and breaches that are unregulated and unreported.

"People are used to having a technology solution [but] social engineering bypasses all technologies, including firewalls. Technology is critical, but we have to look at people and processes. Social engineering is a form of hacking that uses influence tactics," said KnowBe4’s Chief Hacking Officer Kevin Mitnick.

About KnowBe4
KnowBe4 is the world’s most popular integrated Security Awareness Training and Simulated Phishing platform. Realizing that the human element of security was being seriously neglected, KnowBe4 was created by two of the best known names in cybersecurity, Kevin Mitnick (the World’s Most Famous Hacker), and Inc. 500 alum serial security entrepreneur Stu Sjouwerman, to help organizations manage the problem of social engineering tactics through new school security awareness training. More than 1,500 organizations use KnowBe4’s platform to keep employees on their toes with security top of mind. KnowBe4 is used across all industries, including highly regulated fields such as finance, healthcare, energy, government and insurance.

About Elephant
Elephant is a venture capital firm focused on software, internet and mobile companies disrupting industries. The firm was founded in 2015 by Jeremiah Daly and Andy Hunt and has offices in Boston and New York. Elephant is currently investing out of its $140 million debut fund.