Best Friends (http://www.bestfriends.org) and Hallmark Channel Team Up to Encourage Everyone to Swipe Right to Find “The One” at National Pet Adoption Event, February 1-15 at Best Friends adoption centers in Utah and Los Angeles, and at an event in New York, as well as through participating No More Homeless Pets Network partners across the country. 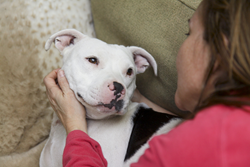 "If you’re looking to bring home a new pet, few people will argue that adopted animals reward their people with a depth of love and loyalty that pets from other sources often don’t seem to rival."

Happy Valentine’s Day! Now here's the bad news. As sincerely as everyone tries, statistics show that being “consciously coupled” is often fraught with failure. According to bestselling author Hellen Chen, more than 85 percent of dating relationships end in a breakup. Not to mention, nearly a third of marriages end in divorce.

But don’t fret, there is a way to set realistic #RelationshipGoals this year: Ditch the dating and adopt a pet.

When looking for love, a person is more likely to find the real deal at their local animal shelter than at the local bar, or on Tinder, or Ashley Madison for that matter. Just for starters, about 81 percent of people on dating sites and apps lie about height, weight or age in their profiles (according to a University of Wisconsin-Madison study). But dogs and cats don’t lie about tail length or being housebroken, what one sees is what one gets.

Instead of roses this Valentine's Day, Best Friends Animal Society is offering a dozen reasons why this year's #RelationshipGoals should include the adoption option.

1.    Hanging with a pet will give pleasant new meaning to “Netflix and chill.”
2.    A pet’s lasting love will abolish the fear of ever being “ghosted” again.
3.    Adopting a pet will help put an end to that fear of commitment.
4.    There's always someone there with a good-morning kiss, even before teeth are brushed.
5.    Walking a cat on a harness and leash is a guaranteed attention-getter.
6.    Chances are a pet will love to spoon and snuggle as much as his person does, if not more.
7.    A new canine companion will give you a valid reason to hang out and meet people at the dog park.
8.    More than 63 percent of people consider pets to be members of the family (according to the AVMA). So no matter what the configuration of a family unit, pets are a perfect source of love and companionship.
9.    If true love isn't revealing itself on Tinder, adopting a pet may be the answer.
10.    A pet will help anyone get accustomed to 24/7 adoration and unconditional love.
11.    An adopted pet can his person become less self-centered, as one learns to put another’s needs before one's own.
12.    When looking for love, but feeling freaked out by forever, check with a local shelter or rescue to find out about fostering.

Contrary to what appears online, there’s plenty of drama-free companionship out there. To make it even more attractive, Best Friends Animal Society and its official media sponsor, Hallmark Channel are offering pet adoption fees starting at $14 to help pet lovers find “The One.” The national event is taking place February 1-15 at Best Friends adoption centers in Utah and Los Angeles, and at an event in New York, as well as through participating No More Homeless Pets Network partners across the country. (More information about the promotion can be found at http://bestfriends.org/TheOne/.)

“If you’re looking to bring home a new pet, few people will argue that adopted animals reward their people with a depth of love and loyalty that pets from other sources often don’t seem to rival,” said Gregory Castle, co-founder and chief executive officer for Best Friends Animal Society. “They seem to know they were given a second chance, and they spend their lives repaying their families.”

Who knows, having a pet might even help a person meet that special someone, if they haven’t already. Relationships come and go, but adoption can—and should-- last a lifetime.

About Best Friends Animal Society
Best Friends Animal Society is the only national animal welfare organization dedicated exclusively to ending the killing of dogs and cats in America's shelters. A leader in the no-kill movement, Best Friends runs the nation's largest no-kill sanctuary for companion animals, adoption centers and spay and neuter facilities in Los Angeles and Salt Lake City as well as lifesaving programs in partnership with more than 1,300 rescue groups and shelters across the country. Since its founding in 1984, Best Friends has helped reduce the number of animals killed in American shelters from 17 million per year to an estimated 4 million. By continuing to build effective initiatives that reduce the number of animals entering shelters and increase the number who find homes, Best Friends and its nationwide network of members and partners are working to Save Them All®.

A pet will give new meaning to "Netflix and chill."

Overcome that fear of commitment.

Get a good morning kiss.

Get noticed with a cat on a leash.

Pets love to spoon and snuggle.

Have a valid reason to hang out at the dog park.

Not finding true love on Tinder?

Get ready for 24/7 adoration and unconditional love.

Learn to be less self-centered.

Don't be freaked out by forever...Find out about fostering.