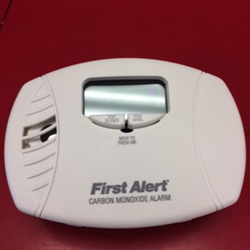 On January 12, 2016 Paul McElwee, a CroppMetcalfe HVAC technician, visited a home in Maryland. The family scheduled an appointment after they noticed their furnace not producing any heat. Shortly after entering the home, Paul was able to identify the problem as a cracked heat exchanger. The cracked heat exchanger was leaking dangerous levels of carbon monoxide into the home, at 2,000 parts per million in the flue. Anything over 100 parts per million in the flue (and 8 parts per million anywhere else in the house) is considered dangerous and is cause to shut down the system and evacuate the house. There were no carbon monoxide detectors found in the house to help detect such a dangerous situation.

A young child living in the home had been sick for weeks, with doctors unable to identify the source of his nausea and headaches. Once Paul identified the CO problem, he recommended the family take the boy to a hospital to be tested for CO poisoning.

The tests confirmed CO poisoning as the reason for the boy and other family members falling ill. Fortunately, doctors were able to treat the boy and he has been recovering ever since. CroppMetcalfe installed a new, safe furnace the very next day, complete with carbon monoxide detectors. The family was thankful there were no long-lasting repercussions of carbon monoxide poisoning, but not every family is so lucky.

Carbon monoxide is a colorless, odorless gas that has been given the name “the silent killer.” The winter season brings terrible stories about families becoming sick and even dying from carbon monoxide poisoning.

The main causes of these tend to be:
-Gas burning appliances that are broken and emit CO into the home.
-Running combustion engine appliances inside the home or another enclosed area like a garage without proper ventilation.
-Air intake pipes and vents becoming clogged from heavy snowfall.

Symptoms of potential carbon monoxide are:
-Fatigue and drowsiness
-Shortness of breath
-Headache
-Nausea and dizziness
-Pain in the chest

If you or family members are experiencing these symptoms, you need to immediately:
-Open windows and doors to bring in fresh air.
-Turn off the appliances.
-Leave your home and call 911 and seek medical attention.

CroppMetcalfe recommends any home which has gas appliances have a carbon monoxide detector on every floor.

For questions about carbon monoxide, CO detectors, or any other safety products, please contact CroppMetcalfe at 703-698-8855.