APDA elects New National Board members and commemorates the dedicated service of past leaders at its Annual Meeting held on January 27, 2016 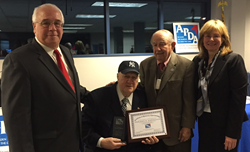 "We are pleased to welcome Pat as Chairman of the Board,” stated Leslie A. Chambers, APDA President and CEO. “Pat has tirelessly served APDA since 2001 when he was first elected to the Board of Directors. His leadership and commitment to APDA was exemplified in 2015 as he led our Strategic Planning process. The 2015-2018 Strategic Plan, which was approved by the Board last year, is a roadmap to future growth and we are privileged to have Pat at the helm to drive our strategic direction and support APDA’s dual mission to Ease the Burden – Find the Cure for Parkinson’s disease.”

Patrick McDermott, a Staten Island resident, is a founding partner of McDermott & Thomas Associates, LLC, an employee benefits and retirement planning advisory firm. He received a Bachelor of Science in Management from St. John’s University, as well as the Chartered Life Underwriter (CLU) designation and the Chartered Financial Consultant (ChFC) designation from The American College of Financial Services. He has worked with hundreds of corporate clients in developing their employee benefit and retirement plan strategies.

Deeply committed to the advancement of his community, Mr. McDermott also serves in a volunteer capacity as a past Chairman of the Executive Committee of the Board of Trustees of Staten Island University Hospital and is a Trustee and Executive Committee Member of Northwell Health (North Shore-Long Island Jewish Health System.)

APDA extends its deep thanks to Fred Greene as the immediate past Chairman of the Board. Mr. Greene began his association with APDA in 1992, after his first wife, Idalee passed away from the effects of Parkinson’s disease. After founding APDA’s North Texas Chapter, Fred was elected to the National Board of Directors and five years later to the Executive Committee. Fred became 1st Vice-Chairman in 2010, and in 2013 became the ninth chairman of the APDA Board to complete the term of Joel A. Meile Sr., who died in May of that year.

Mr. Greene, a native of New Rochelle, NY, earned a Bachelor’s degree in journalism from the University of Missouri and served in the US Army from 1943 to 1946. Professionally, he held various positions including Vice President of Public Relations for Zales Corp, founder of the communication firm Green-Webb Associates, and spent 25 years in journalism as Southwest Editor for McGraw-Hill Publications, and Editor and Writer for Harte-Hanks Newspapers in Texas.

“APDA owes a great deal to Vinny,” said Fred Greene, immediate past Chairman. “Throughout his tenure as an APDA volunteer, Vinny had tremendous impact from spearheading the construction of the national headquarters office in 2005, to redefining APDA’s identity as a national grassroots organization in the late 1990’s. His legacy will have a lasting impression. Our deep thanks and appreciation to Vinney for all he has done to serve APDA and the Parkinson’s community.”

In other APDA national Board election results, John Z. Marangos, Esq. was elected to 1st Vice Chairman, Elliot J. Shapiro to 2nd Vice Chairman and Thomas K. Pennett, Esq. as 3rd Vice Chairman. While all three are existing APDA Board members, they were newly elected to these Officer positions.

Additional members of the Board and Executive Committee were re-elected to their roles for two- and three-year terms. To see a full listing of the APDA National Board of Directors, please visit our website.