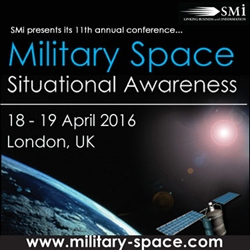 SMi are delighted to announce Dr Eva Bernhardsdotter, Head of Space Programs, FMV (Swedish Defence Material Administration), will be speaking on Day One of the Military Space Situational Awareness Conference. Her presentation entitled "Sweden’s Approach to Space Situational Awareness Programme" will explore the Swedish rationale for SSA in the face of the evolving space environment. She will also discuss the proposed SSA strategies and governance in Sweden, as well as current and planned efforts in support of the Swedish Armed Forces.

In line with this, Christer Andersson, Senior Scientist at the Swedish FOI will be presenting on Day Two of the conference to advise on “Some preconditions, obstacles and opportunities to consider when implementing an operational SSA for a small European nation”. Key points of his session include the current research into SSA in support of Swedish and Allied forces, enhancing SSA through advanced processing systems, and future technologies for space domain awareness and control.

Hosted over two days, the conference will focus on space situational awareness as the centre of securing current and future space operations. We will discuss emerging technologies and operational approaches to SSA and how emerging space nationals are striving to enhance national security in the Space Domain.

There is currently an early bird offer saving £100 off of the conference price which is available until 29th February 2016.

About SMi Group: Established since 1993, the SMi Group is a global event-production company that specializes in Business-to-Business Conferences, Workshops, Masterclasses and online Communities. We create and deliver events in the Defence, Security, Energy, Utilities, Finance and Pharmaceutical industries. We pride ourselves on having access to the world’s most forward thinking opinion leaders and visionaries, allowing us to bring our communities together to Learn, Engage, Share and Network. More information can be found at http://www.smi-online.co.uk