California Is Not For Sale Ballot Initiative Collects 40,000 in Two Weeks 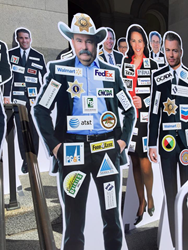 People have been eager to sign the petition and our grassroots program has seen an influx of new volunteers who are carrying our petition even further.

John Cox, the Chairman of the California Is Not For Sale Initiative, announced that the campaign to require California State Representatives in Sacramento to wear the names of their top sponsors while on the Floor has gathered 40,000 signatures. The Initiative, which received Title and Summary on December 31, 2015, began collecting signatures just two weeks ago.

“We have been met with incredible enthusiasm across the State,” said Cox. “People have been eager to sign the petition and our grassroots program has seen an influx of new volunteers who are carrying our petition even further.”

The Initiative needs 365,000 valid signatures in order to qualify to be on the November, 2016 ballot, and at this rate will reach that number well in advance of the deadline at the end of April.

In the coming months, the Initiative will aggressively campaign across the State, which will include its marquee demonstration piece: 120 logo-covered cutouts of each member of the Assembly and Senate.

The California Is Not For Sale Initiative comes at a time when the entire nation is experiencing a meteoric rise in spending on political campaigns. Cox said of the spending, “Special interests give money to politicians with the expectation of a return. They have a bottom line to protect and a cause to advance. If giving $50,000 to a handful of Assemblyman buys them votes or an advocate on the inside, it’s worth the investment. And they don’t have to look hard for politicians who are taking donations.”

The campaign has been funded by Chairman Cox, who has committed $1,000,000 to get it on the ballot.

Registered California voters can download, print, sign, and return the Initiative from this page. For more information, visit http://www.californiaisnotforsale.com