Made in Oklahoma Coalition February Recipes 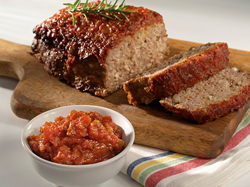 Officials with the Made in Oklahoma Coalition (MIO) are happy to announce the recipes for the month of February. The recipes (listed below) include products from the following MIO Members: Shawnee Milling, Southern Okie, Suan’s, Hiland Diary, Griffiin’s, and more. Enjoy these tasty dishes.

Cream butter in an electric mixer until lightly and fluffy. Add half the powdered sugar, slowly mixing until combined, then mix in the remaining half. Add marshmallow cream and vanilla extract, mixing on low speed. Add milk to thin out frosting, adding more or less as needed. Serve with Dark Chocolate Billy Goat Ice Cream.

Frosting:
Beat together cream cheese and butter until creamy. Mix in 1 teaspoon vanilla, and gradually stir in powdered sugar. Spread cream cheese frosting between layers and on top and sides of cake.

Mix all ingredients well, form into a loaf and place in baking dish. Bake at pre-heat 350 degree oven for 30 minutes, begin to baste ever 10 minutes with Suan’s® Basting Sauce until done, about another 30 minutes.

To Freeze
This recipe can be frozen before baking or when finished. For meatloaf, combine all ingredients, form into loaf shape; freeze in re-usable plastic bag. When ready to use, thaw completely and bake as above or if pre-cooked re-heat in microwave or in a covered pre-heated dry heavy skillet until done.

For basting sauce complete first step of sautéing onions, peppers and garlic, combine all ingredients and pour into re-usable plastic bag. When ready to use, thaw in heavy saucepan and cook as directed. Follow basting directions as above.

About Made in Oklahoma Coalition
Providing a marketing and promotional platform to assist more than 60 Oklahoma food manufacturers, the Made in Oklahoma Coalition builds brand preference and loyalty for members and its products. The MIO Coalition-member companies create a positive economic impact on the Oklahoma economy by employing more than 28,000 Oklahomans. The member- companies of MIO generate over $4.1 billion in annual sales for the state’s economy. The MIO Coalition continues to expand the footprint of Oklahoma’s food manufacturing sector through business retention and growth. For more information about MIO and its member companies, please visit http://www.miocoalition.com.