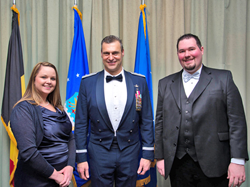 Andrews Federal Credit Union recently sponsored the 2015 US Air Force Awards Dinner at the SHAPE Club, located on S.H.A.P.E., outside of Mons, Belgium.

The dinner, an annual event Andrews Federal has sponsored over the past four years, is held to award the top Promotable Grade Officers, Senior Non-Commissioned Officers, Non-Commissioned Officers, and Airmen of the SHAPE/Chievres Community. Major General Joseph T. Gaustella, Jr., Deputy Chief of Staff, Operations and Intelligence, Supreme Headquarters Allied Powers Europe, Casteau, Belgium, the host for the event, spoke on the vital role the US Air Force plays with the United States participation in the NATO Alliance and our partner countries. The award winners will now proceed onto the MAJCOM (USAFE) level to compete against other winners.

“This is the third year I have been able to attend this unique event honoring the Officers and Airmen of the Air Force that have worked so hard in their careers to make a difference; not only in their daily job in the Air Force, but also within our community,” said Joshua Barrett, Chievres Branch Manager, Andrews Federal Credit Union. “We have such a vast amount of talent within our small community, and it is an honor to be part of an event that celebrates and acknowledges that talent.”

About Andrews Federal Credit Union
Andrews Federal Credit Union was founded in 1948 to serve the needs of military and civilian personnel by providing a vast array of financial products and services. With over $1 billion in assets, Andrews Federal has grown to serve more than 116,000 members in the District of Columbia, Joint Base Andrews (MD), Springfield, Virginia (VA), Joint Base McGuire-Dix-Lakehurst (NJ), and military installations in central Germany, Belgium, and the Netherlands. In addition, the Credit Union serves as a financial partner with many select employee groups in Maryland, the District of Columbia, Virginia and New Jersey.