Can Common-Sense Values Save Lives in Los Angeles?

The Way to Happiness Foundation, bikers, and lowriders, join forces to end the violence in Los Angeles for United in Peace's January 2016 Peace Ride.. 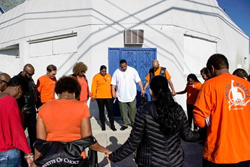 Riders joined hands for a prayer for Ciara Grisby, murdered November 18 in a cold-blooded gang-related shooting.

Hundreds of bikers and lowriders roared through the streets of South L.A. on their custom Harley-Davidson motorcycles and Corvettes on January 24 for United in Peace’s January 2016 Peace Ride.

Founded by the Southern California Cease Fire Committee, United in Peace is a broad coalition of motorcycle and car club members, churches and community groups who devote the last Sunday of every month to riding through some of the toughest Los Angeles neighborhoods infested with gangs, prostitution and drugs. They pass out copies of The Way to Happiness as part of their ambitious goal of bringing the murder rate down to zero in these communities.

Reverend Carolyn Percy, President of the Way to Happiness Foundation International, began this month’s Ride with a prayer.

“We are sending out the message that the community is united behind making our streets safe,” she said.

The group traveled through Broadway-Manchester, Green Meadows and Watts before arriving at 97th Street and Avalon Boulevard, where they said a prayer for 20-year-old Ciara Grisby, murdered November 18 in a cold-blooded gang-related shooting.

Patricia Harris, Director of Special Affairs of the Church of Scientology of Inglewood, said “We can combat violent crime and murder by reaching those committing, condoning and protecting the perpetrators of these crimes. Violent crime is a product of declining moral standards, which is why The Way to Happiness plays such an important role in this campaign.”

Written by L. Ron Hubbard The Way to Happiness contains 21 precepts for successful living that can be followed by any person of any background, culture or creed.

United in Peace, is a multi-ethnic, multi-faith movement, to end the senseless violence and bring peace and unity throughout the community.

Riders joined hands for a prayer for Ciara Grisby, murdered November 18 in a cold-blooded gang-related shooting.

Bikers promoting an end to the violence in South Los Angeles.

Rev. Carolyn Percy began the Peace Ride with a prayer. President of The Way to Happiness Foundation, she has been involved with the Peace Rides since their inception.