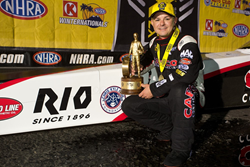 “We’ve been working with the Torrence team for several months to finalize this partnership and couldn’t be more excited about our future together," said Patrick Thomas, Rio Ammunition National Sales Manager.

Rio Ammunition is proud to announce a new partnership that will bring Rio Ammunition to millions of race fans at tracks around the country but also to millions more on TV via the FOX Sports Networks. Steve Torrence, a championship contender on the NHRA’s premier Top Fuel drag racing circuit, is the newest member of Team Rio. Born and raised in east Texas close to our new ammunition plant in Marshall, Steve is an avid hunter and outdoorsman that makes this new partnership a natural fit for both Rio and the Torrence Racing family.

“I’m excited to be representing Rio Ammunition,” Torrence explained. “One of the things I really enjoy outside of racing is shooting, whether it’s deer, birds, or skeet. So it’s a good fit for me personally and for our program. Plus, it’s another east Texas company so that just makes it a natural fit for us.”

“We’ve been looking the past several years for a company we could partner with,” Torrence said. “Rio Ammunition is a perfect fit because they believe in building for the long term and building from the ground up, just like we do. Together, we are committed to the growth of both of our brands.”

Rio Ammunition, a global leader in the development, manufacturing, and distribution of shotgun ammunition products for the hunting and sport shooting markets, will continue to expand its reach within the outdoors industry but will also seek strategic partnerships outside to reach new fans and shooters. This partnership will help to accomplish that objective with Torrence Racing joining Delta Waterfowl, the CCA Texas STAR Tournament Series, OSP Shooting School, and Drake Waterfowl as official corporate partners.

Patrick Thomas, National Sales Manager for Rio, was also very excited about the new partnership. “We’ve been working with the Torrence team for several months to finalize this partnership and couldn’t be more excited about our future together. After spending significant time with them it was very apparent to us that the Torrence Racing family, and to a greater extent the CAPCO Contractor team as a whole, operates by a mutually shared set of values for which both our brands are known. With their being from east Texas, and with the natural correlation between the racing fan bases and the shooting sports markets, this partnership made complete sense to us.”

Torrence, 32, is a former Top Alcohol Dragster World Champion (2005) who has won six times on the NHRA’s elite Top Fuel circuit, including a season-opening victory in last weekend’s Circle K Winternationals in Pomona, CA. He is a Pro Staff member for Bowtech and also serves as a brand ambassador for the Chris Kyle Frog Foundation to support military veterans, first responders, and their families.

Rio Ammunition, Inc., founded in 2001 as a subsidiary of Madrid-based MAXAM Outdoors and with its domestic manufacturing facility in Marshall, TX, is the worldwide leader in the development, manufacturing, and marketing of sporting and hunting cartridges. Rio’s success is based on proprietary technological developments – as a result of ongoing investment in R&D – and a totally integrated production chain ranging from the manufacturing of the raw materials to the production of all cartridge components, including cases, primers, powder, wads, and lead shot.

Based in Brownsburg, Ind., Torrence Racing, Inc., is a professional drag racing team competing in the 24-race NHRA Mello Yello Series. It fields Top Fuel dragsters for principal driver Steve Torrence and his father, Billy, both of them residents of Kilgore, TX. The team was founded in 2011 and since has won six NHRA tour events and finished as high as sixth in NHRA points (2014). Steve Torrence is a former NHRA World Champion in the Top Alcohol Dragster division (2005) and Billy Torrence is a past tour winner in Super Comp (2011). Follow Torrence Racing at http://www.torrenceracing.com, on Twitter at @SteveTorrence, on Facebook at Facebook.com/Steve Torrence – Top Fuel Pilot, and on Instagram at @Steve Torrence.