It’s Not Just A Girl Thing: Queendom Study Reveals That Men Struggle With Emotional Eating Too

A recent study by Queendom.com and PsychTests.com indicates that both men and women can fall victim to emotional eating. The only difference lies in why they do it. 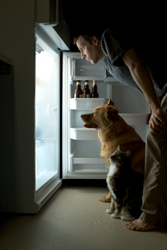 Emotional eating is not limited to women.

When you consume food for reasons other than hunger, you are engaging in emotional eating.

With Eating Disorder Awareness Week comes a new wave of effort to encourage sufferers to seek the guidance of a therapist and a nutritionist – and with good reason. The long-term effects of Anorexia alone are staggering, from fragile bones to infertility to significant heart damage. Even a seemingly harmless emotional eating binge can lead to weight gain, and act as a precursor to more serious eating issues.

Yet while using food to cope with stress or sadness has often been attributed to women, research by Queendom.com indicates otherwise. Data collected from their Emotional Eating Test reveals that both genders fall victim to emotional eating, but for different reasons.

Collecting data from 521 emotional eaters, researchers at Queendom attempted to uncover the emotional triggers that lead people to binge on comfort food. While both the men and women in Queendom’s sample indicated that they have a tendency to eat to cope with their emotions, where they differ is on the “why.”

1) The desire to be carefree

When people are told that they can’t have something, it often makes them want it even more, and this seems to be the case for male emotional eaters. They dislike the feeling of restriction, especially when it comes to food.

Going into a situation with a defeatist attitude increases a person’s chances for disappointment and failure. While male emotional eaters recognize that emotional eating is not healthy, they sabotage their chances of curbing this habit by adopting the following beliefs:

1) An external locus of control

Female emotional eaters are more likely to have difficulty letting go of guilt. Their belief that they should be ashamed of themselves, for whatever reason, acts as an emotional eating trigger:

“What people fail to realize is that emotional eating triggers are not always the result of negative feelings or experiences,” explains Dr. Jerabek, president of PsychTests, the company that runs Queendom.com. “Essentially, emotional eaters don’t turn to comfort food only when they’re sad, anxious, or feeling guilty. Boredom can also be an emotional-eating trigger as well as happiness - after all, how often have you celebrated a milestone or a promotion by going out for a lavish dinner? The act of eating food one loves extends the feelings of joy. The bottom line is still the same: When you consume food for reasons other than hunger, you are engaging in emotional eating. And this goes for both genders. It would be incorrect to assume that only women fall victim to emotional eating. This also means that both men and women can fall victim to eating disorders,” concludes Dr. Jerabek.

Mental health issues, including emotional eating, do not discriminate. Researchers at Queendom offer the following tips to both men and women:

o Rate your hunger on a scale from 1 to 10 (1 being “Not hungry at all,” 10 being “Absolutely famished”). Eat when your hunger level reaches 7 or 8. Waiting until you’re starving - like when your stomach is growling like a bear coming out of hibernation - will make you eat too much, too fast.
o Feelings of guilt are more likely to be triggered when you overeat. To avoid this, eat slowly, take smaller bites and chew properly. Eat until you are 70% full and then wait. Why? Because satiety signals take about 15 minutes to reach your brain.
o Don’t let time dictate your eating habits. Just because lunch at work is scheduled at noon, that doesn’t mean you have to eat. Follow your body’s signals, not the clock.
o Eliminate grazing and mindless eating. When you are eating, take the time to enjoy it. Don’t eat while watching TV, playing video games or reading. Mindless eating can pack on enormous amounts of calories without giving you any pleasure.

Want to determine your emotional eating triggers? Go to http://www.queendom.com/tests/take_test.php?idRegTest=1565

Professional users of this assessment (therapists, life coaches and counselors) can request a free demo of the Emotional Eating Test or any other tests from ARCH Profile’s extensive battery: http://hrtests.archprofile.com/testdrive_gen_1

Using food to cope with stress or sadness has often been attributed to women, but research indicates otherwise.Men also suffer from stress, which means they may also use food as a coping mechanism.