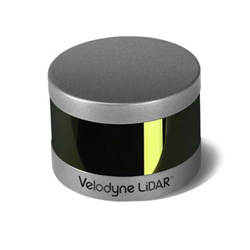 With a 30-degree vertical field of view and a range of 100 meters, Puck LITE builds on the success of Velodyne’s VLP-16 LiDAR Puck. Puck LITE matches the features and specifications of the VLP-16 and does not compromise on performance – and still manages to achieve a lower weight. Unveiled in late 2014 as a “product of the future,” the VLP-16 -- a 16-channel, real-time 3D LiDAR sensor that weighs 830 grams -- has literally taken off. At UAS/UAV Mapping Forum last fall, the company announced that more than 1,000 VLP-16 sensors have been sold since the product’s formal unveiling the previous year.

According to MarketsandMarkets, the global UAV market is set to grow at a 34.36 percent CAGR from 2015 to 2020, with UAV shipments to reach 3.8 million units in 2020. “The UAV market is clearly in high-growth mode,” said Ravindra Puranik, market analyst, and Sachin Garg, Research Manager, MarketsandMarkets. “Moving forward, we look for LiDAR technology to become an even more integral part of mobile mapping, surveying, inspection and navigation.”

Weight remains a critical parameter for operating UAVs; the lighter the UAV – including the sensors it incorporates -- the longer the flight time. Puck LITE addresses the requirements from UAV operators by reducing sensor weight by almost 30 percent, thereby enabling longer flight times while providing the same high level of performance as the VLP-16.

“The Puck LITE is a natural follow-on product to the VLP-16 and was designed expressly to exceed the exacting requirements of the UAV market,” said Wayne Seto, Product Line Manager, Velodyne LiDAR. “For UAVs and aerial 3D mapping applications generally, weight is everything. Our new offering retains all of the power and capabilities of the original Puck in an even lighter package.”

About Velodyne LiDAR
Founded in 1983 and based in California’s Silicon Valley, Velodyne LiDAR Inc. is a technology company known worldwide for its real-time LiDAR (light detection and ranging) sensors. The company evolved after founder/inventor David Hall competed in the 2004-05 DARPA Grand Challenge using stereovision technology. Based on his experience during this challenge, Hall recognized the limitations of stereovision and developed the HDL-64 Solid-State Hybrid LiDAR sensor. Velodyne subsequently released its compact, lightweight HDL 32E sensor, available for many applications including UAVs, and the new VLP-16 LiDAR Puck, a 16-channel real-time LiDAR sensor that is both substantially smaller and dramatically less expensive than previous generation sensors. Market research firm Frost & Sullivan has honored the company and the VLP-16 with its 2015 North American Automotive ADAS (Advanced Driver Assistance System) Sensors Product Leadership Award. Since 2007, Velodyne LiDAR has emerged as the leading developer, manufacturer and supplier of real-time LiDAR sensor technology used in a variety of commercial applications including autonomous vehicles, vehicle safety systems, 3D mobile mapping, 3D aerial mapping and security. For more information, visit http://www.velodynelidar.com. For the latest information on new products and to receive Velodyne’s newsletter, register here.