Cuban medical advances could benefit the health of thousands of Americans 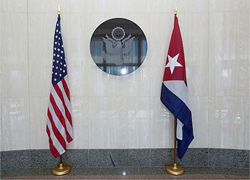 Joint research with Cuba’s leading scientific institutions such as its Molecular Immunology Center could lead to breakthroughs in cancer treatment and prevention.

Medical Education Cooperation with Cuba (MEDICC) today recommended specific actions by President Obama to improve Americans’ health through greater cooperation between the United States and Cuba. Most important, the organization says, is for the president to authorize Cuban-developed pharmaceutical products be reviewed through the same regulatory process as medicines from other countries, without the extra hurdles they now face. This step, plus other executive actions outlined in a white paper released today, could have far-reaching benefits for the health of thousands of Americans. For example, approximately 75,000 of the 29 million diabetics in the U.S. will require amputation from diabetic foot ulcers. International scientific articles show that a Cuban medication, unavailable in the U.S., reduces the risk of diabetic foot amputation by over 70 percent in countries where it is accessible.

“Numerous Cuban innovations, such as a promising lung cancer vaccine that could extend life and quality of life, are helping patients worldwide but not in the U.S.,” said MEDICC executive director Dr. Pierre LaRamée. “Joint research with Cuba’s leading scientific institutions such as its Molecular Immunology Center could lead to breakthroughs in cancer treatment and prevention. With the president’s moonshot commitment to fight cancer, all research leads and partners should be explored.”

The MEDICC white paper “A Safer, Healthier Future through U.S.-Cuba Cooperation” highlights actions the president can take, including general authorizations for: