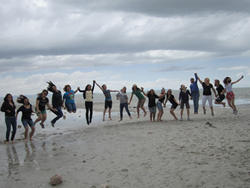 “Our support of the intuitive eating model has helped hundreds of struggling girls get back to their healthiest, happiest selves," Dan Stuart MS, LMFT, Executive Director of Solstice.

Symptoms of disordered eating often look the same as eating disorders, including restricting food intake and purging. However, teens struggling with patterns of disordered eating may also follow a rigid exercise regimen, take part in yo-yo dieting, and have a preoccupation with food that disrupts their everyday life.

As residential treatment centers specializing in treating girls struggling with trauma-related issues, obsessive compulsive disorder, and other emotional and behavioral difficulties, both Solstice programs have expertise in treating disordered eating.

Solstice East and Solstice West offer the following advice to parents concerned that their teen may have fallen into patterns of disordered eating:

-Act fast: As soon as parents see signs of disordered eating in their child, they should address the issue without delay.
-Don’t try to rescue them: This is not something that parents can take care of on their own. Many times, when parents try to take control of the situation it can just make things worse for teens.
-Get educated: Parents should read everything they possibly can about eating disorders. Eating disorders and disordered eating are invisible illnesses, which makes them hard to detect.
-Seek professional help: Disordered eating and eating disorders don’t go away on their own. More often than not, teens will not volunteer to get treatment on their own. Parents need to take action and get their teens diagnosed and treated as soon as they begin to spot tell-tale symptoms.

“Promoting awareness of these disorders is important because parents need to be educated about what disordered eating looks like,” says Susan Elaine, M.Ed, LMFT, Primary Therapist at Solstice East. “Our culture tells us we should be thin, which creates a stereotypical image of an overly thin girl with an eating disorder. What many people don’t realize is that a lot of people with eating disorders are not thin at all. It’s not a stereotypical illness.”

Solstice and Solstice East help girls recover from symptoms related to disordered eating. Students are required to take responsibility for their eating and must be able to eat buffet-style before coming to the programs.