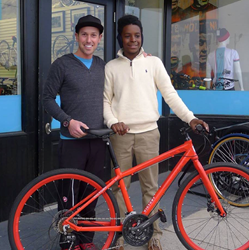 “This is a new, cutting-edge industry being created in Memphis, and it’s going to have a large, positive economic impact on the city” Butcher said.

Owner and CEO of Victory Bicycle Studio Clark Butcher is pleased to announce that international 3T Cycling will bring its its first North American Customer Service and Repair Center for 3T wheels to Memphis, TN.

Clark will lead the venture, creating a new alliance between 3T cycling and Victory Bicycle Studio.

Memphis will now surge into the world of professional bicycle servicing and distribution, bringing a future of jobs and infrastructure to the city.

“This is a new, cutting-edge industry being created in Memphis, and it’s going to have a large, positive economic impact on the city of Memphis,” Butcher said.

3T Cycling is a leader in manufacturing the world’s finest and lightest bicycle components and equipment for every kind of bike racing, from handlebars and seat posts to wheels and aerobars. In 2015, they added 5 new service centers across Canada in Europe. http://www.3tcycling.com

3T president René Wiertz is excited for the future of 3T’s partnership with Clark. “We are delighted to have made this alliance,” René said. “Victory Bicycle Studio is a highly skilled outfit with all the resources needed to maintain and repair our wheels.”

Clark’s venture with 3T goes far beyond just growing the economy of Memphis. He has a vision of hope and opportunity.

Clark will focus on the socio-economically distressed community of Binghampton for the new 3T service and distribution center. With Victory Bicycle Studio already located in the neighborhood, Clark will continue to revitalize this great community by staffing the center from youth of the neighborhood.

“My main goal for the repair and customer service center is for it to be located within walking distance to Binghampton,” Clark said. “I want to give young men and women in the community the opportunity to learn a skill that leads to a full-time career and clear path to prosperity”

Over the next few months, Butcher will be working towards finalizing the location for the venture. During this time, both the CEO and COO of 3T Cycling will come from Milan, Italy to visit and tour Memphis, the home of their new North American service center.

“We have no doubt Clark Butcher’s team at Victory Bicycle Studio will meet the high standards we set for 3T Service Centers,” René said. “Our customers in the United States can buy our wheels with the assurance of world‐class service backup.”