With the recent passing of Lemmy Kilmister, Big Statues is honored to announce that they will be creating a life memorial statue for Lemmy Kilmister. This statue is planned to be displayed in the Rainbow Bar and Grill, one of Lemmy's favorite "hangouts". 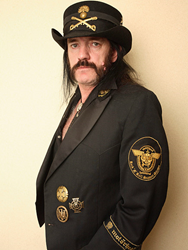 I was a huge fan of Lemmy Kilmister, and so I am grateful that I was chosen for this opportunity. He inspired me with his talent, and I hope to do the same for someone, somewhere, someday as well!

On December 28th, 2015, just 4 short days after celebrating his 70th birthday, Lemmy Kilmister unexpectedly passed from this life to the next, due to health complications. Lemmy was full of life, and full of adventure. he was the lead bassist and vocalist for the rock band "Motörhead ". He helped form the band in 1975, in which he was the only constant member of Motörhead since the creation of the group.

Big Statues was contacted by the Rainbow Bar and Grill, one of Lemmy's frequent stops. They expressed their vision of a memorial statue being created in honor of this legendary rock star. We were overjoyed when the idea was expressed, especially because Matt Glenn, president of Big Statues, great love for rock and roll music. "I was a huge fan of Lemmy Kilmister, and so I am grateful that I was chosen for this opportunity. He inspired me with his talent, and I hope to do the same for someone, somewhere, someday as well!" Big Statues knew from the beginning, that they wanted to be a part of this great life celebratory project.

Travis Moore, a California native artist, is creating a mockette of this great statue, inspired by things of great importance to Lemmy. "It has been a great privilege working with such a talented artist." says Matt Glenn, "I am excited to see how the final product comes to life."

Many friends, family members, and fans have reached out in sharing memories of the great musical star. Gene Simmons from the band Kiss said, "Behind the Man and the Legend was a kind man who went out of his way to make you feel special. The Lemmy I knew and loved always held out his hand to help new bands. I will miss him." Lemmy was the kind of man to offer help, where help wasn't even needed. Big Statues hopes to make this statue something very special for those that miss him, and have been influenced in one way or another.

For more information regarding the Lemmy Kimister statue, please visit the web page for more info.