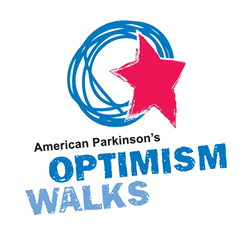 The funds raised through the Optimism Walks will enable APDA to continue providing information, education, and support to those impacted by Parkinson's disease and fund scientific research into the causes, prevention, treatments and ultimately the cure.

Thousands of participants will walk this year to raise awareness of Parkinson's disease and funds to support the American Parkinson Disease Association's (APDA) dual purpose to Ease the Burden – Find the Cure. The 2016 Optimism Walks are part of a nationwide movement to mobilize and inspire people to step up and help put an end to Parkinson’s disease. Optimism Walks will take place in cities across the country including, Boston, MA; Chicago, IL; Waterford, Westport and West Hartford, CT; Madison, WI; Nashville, TN; Omaha, NE; Phoenix, AZ; Warwick, RI; San Antonio, TX; Seattle, WA; Reno, NV; Boca Raton, FL; and others throughout the United States.

Each APDA Optimism Walk is a fundraising event that offers a short walk (between 1-3 miles, distance varies by location) and an important opportunity for friends, families, and individuals coping with Parkinson's to take their passion and concern and turn it into a positive experience aimed to help end the devastation of Parkinson’s disease. Optimism Walks offer additional support, educational opportunities, family-friendly activities and the chance to bond with others who are similarly connected.

"There has been great progress in Parkinson’s disease treatments and programs, but there is still much more to be done to end this disease and the challenges endured by those living with Parkinson’s,” said APDA President and CEO Leslie A. Chambers. “The funds raised through the Optimism Walks will enable APDA to continue providing information, education, and support to those impacted by Parkinson's disease and fund scientific research into the causes, prevention, treatments and ultimately the cure. Every dollar raised makes an important difference."

Pharmaceutical companies Lundbeck and US WorldMeds have joined as National Sponsors of the Optimism Walk 2016 event series. Representatives from both companies will be on hand at every event to meet members of the Parkinson’s community and demonstrate their special commitment to the lives of people with Parkinson’s disease, families and care partners as they work tirelessly to bring innovative solutions to those living with this disease.

“APDA's Optimism Walks run from April through October and are a great way for both people with Parkinson's and the general community to get out for a day of fun and exercise, while playing a part in the fight against this disease," Chambers said.

To find an Optimism Walk in your area, visit http://www.apdaparkinson.org/optimism-walks/

About the American Parkinson Disease Association (APDA)
APDA was founded in 1961 with the dual purpose to Ease the Burden - Find the Cure for Parkinson's disease. Since its founding, APDA has raised and invested more than $87 million to support scientific research, patient services and education, and elevate public awareness. As the country's largest Parkinson's grassroots organization, APDA is here to serve the more than one million Americans with Parkinson's disease and their families through a national network of Chapters, Information and Referral (I&R) Centers, and support groups. APDA also funds Centers for Advanced Research and awards grants to fund the most promising research toward discovering the cause(s) and finding the cure for Parkinson's disease.