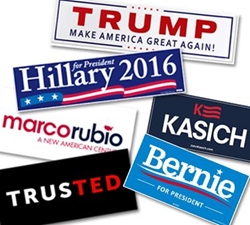 With an eye on Tuesday’s primaries and how promotional products are used in elections, ASI asked residents in primary states this question: If you received a bumper sticker from each of the presidential candidates, which one would you be most willing to put on your car?

“We purposely chose to ask people about bumper stickers because it is an iconic election promotional product that’s also very personal,” said ASI Editorial Director Andy Cohen. “While you might accept and use a branded pen from a candidate you don’t necessarily support, no way would you put a bumper sticker on your car if you didn’t really endorse a candidate.”

In the lead-up to Super Tuesday, ASI released results from voter polls taken in nine, non-caucus states participating in primaries. More than 600 people from each state participated in each survey that was fielded among the Google Consumer Survey Network. All responses were collected between February 20-25.

In all nine states, voters ASI polled chose Trump and Sanders by wide margins. Click here for results and graphics.

When asked about the popularity, in particular, of the Vermont senator with Democrats, versus former Secretary of State Hillary Clinton, ASI’s Director of Market Research Nate Kucsma said, come Tuesday, voters ASI polled may end up voting with their heads instead of their hearts. “Although our poll tells us lots of people love Sanders enough to put his bumper sticker on their car, they may end up voting for Hillary because they think she has the best chance to win in November,” Kucsma said. “Whereas Republican voters truly believe that Trump, or whomever else they support, can win it all in November.”

Below are results from ASI’s Presidential Promo Poll:

Promo products, also known as swag, freebies and giveaways, are items like pens, T-shirts, caps, coffee mugs and high-tech electronics imprinted with a logo or slogan used by companies, schools and non-profits to advertise their brand and events and to thank employees and clients.

About ASI
The Advertising Specialty Institute (ASI®) serves a network of 25,000 suppliers, distributors and decorators in the $22 billion promotional products industry.