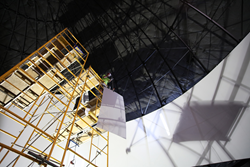 This 21st century extreme makeover now allows visitors to travel through time and space to anywhere our data and our imaginations can take us.

A close-up view that is so spectacular, only the astronauts have a better seat!

“When it first opened in 1964, the planetarium used giant opto-mechanical machines that simply replicated the night sky. This 21st century extreme makeover now allows visitors to travel through time and space to anywhere our data and our imaginations can take us. Whether it’s to neighboring planets, distant galaxies, a stellar birth cloud, a star in the throes of death, or even back to the big bang when our universe began, every image will be about as sharp and vivid as the human eye can perceive,” said Dr. Carolyn Sumners, VP of Astronomy & Physics at HMNS.

The “world’s best” moniker rests on the system’s ability to deliver more than 50 million unique pixels at a level of resolution and contrast that has never been seen on Earth (or any other planet, as far as we know). With an image this clear, you can identify the streets of Houston from space, tour the Valles Marineris on the surface of Mars or explore individual clouds in the storms of Jupiter’s Great Red Spot.

But a great picture is nothing without an immersive experience to match it. To complete the experience of “being there,” the planetarium’s seats have been raised up and into the all-new Na-noSeam™ dome. Tilted to 20 degrees, it literally surround visitors with sight and sound for an experience museum visitors won’t get anywhere else.

As if this dazzling projection weren’t enough, the software that drives the Digistar system also has the power to send you on an incredible adventure across the vastness of space. Using the lat-est science from NASA and contemporary astronomy, Digistar can build a map of the universe from any distant vantage point. Get close to the Orion Nebula or an exoplanet and view our stellar neighborhood at a new angle. Because let’s face it; we’ve all seen pictures of Earth from the moon, but have we seen the Solar System from the Pleiades?

These upgrades return the Burke Baker Planetarium to its status as the best in this world — or any other — and Houston as the premier location to learn about the world of astronomy. Be one of the first to visit the all-new planetarium and witness the best view of the stars on the planet.

The Houston Museum of Natural Science—one of the nation’s most heavily attended museums—is a centerpiece of the Houston Museum District. With four floors of permanent exhibit halls, and the Wortham Giant Screen Theatre, Cockrell Butterfly Center, Burke Baker Planetari-um and George Observatory and as host to world-class and ever-changing touring exhibitions, the Museum has something to delight every age group. With such diverse and extraordinary offerings, a trip to the Houston Museum of Natural Science, located at 5555 Hermann Park Drive in the heart of the Museum District, is always an adventure.