Author Joy Elan is a vibrant and outgoing single mom, teacher, mentor and lover of learning who earned undergraduate and graduate degrees from U.C. Berkeley and Stanford University, respectively. After publishing four well-received books of poetry, she shares her wondrous personal life in a new biographical novel, "Life Is A Canvas." 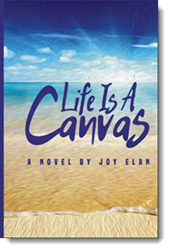 "Life Is A Canvas" book cover

Joy Elan has proven that she is much more than just an award-winning poet with the release of her latest book "Life Is A Canvas" ... this book is magnificently written and will only open new doors for this young, talented and gifted poet/author.

Bay Area author and poetess Joy Elan has resided all of her life in Oakland and Berkeley, CA. In her younger years—after having earned undergraduate and graduate degrees from U.C. Berkeley and Stanford University—she was an avid keeper of personal journals. After later publishing three well-received books of poetry, Elan began referring back to diaries that she recorded as long as ten years ago. She decided to share her personal life, dreams and life's lessons in a new biographical novel titled "Life Is A Canvas." Elan commented, "Writing this book involved me going back in time and recreating some things that occurred in my life during 2005 and 2006."

In "Life Is A Canvas," Allegra Johnson is a young, vibrant, well-educated entrepreneur with dreams. From the outside, she seems to be accomplishing all that she's dreamed of ... except love. As she paints her life's seasons—while her best friend Leelah observes—Allegra learns that not everyone will see her big picture.

"I came up with the title, "Life Is A Canvas," from Abraham Lincoln's quote, "The best way to predict your future is to create it"," commented Elan."Writing is my superpower—my way of illustrating my life's varied encounters on paper (with creative liberties)."

The multi-talented author invites readers to go on an adventure with her and have fun. She said, "Life is not always so unyielding. It's okay to mess up along the way, as long as you pick yourself up, pursue your dreams and persist in reaching your most high-ceilinged goals." Elan continued, "That is what I did with this book. I made mistakes when I was younger and this is me saying, "If I only knew then what I know now!"

Does Allegra succeed in her business venture? Does she find the man of her dreams? At her wits end, she takes a solo trip to Napa, CA wine country to figure out if her business and her man are worth their respective efforts. Travel with Allegra as she learns and grows!

"Joy Elan has proven that she is much more than just an award-winning poet with the release of her latest book "Life Is A Canvas". Her readers and fans were patiently waiting on this book and she has done a fantastic job. The story line is seamless and the characters are well rounded. In my honest opinion, this book is magnificently written and will only open new doors for this young, talented and gifted poet/author." - DJ GATSBY'S BOOK CLUB

ABOUT THE AUTHOR:
Born with a hearing impairment, Joy Elan has required hearing aids since the age of 15 months.1 Now, the single mother of a pretty and gifted little 8-year-old daughter, Elan was born in Berkeley, CA in July 1983—to a mother who was herself single—and raised in neighboring Oakland, CA where she attended a Deaf/Hard of Hearing program in the Oakland Unified School District (OUSD).

Later Elan's mother moved them from the OUSD—where little support was provided during her latter grade school years—back to Berkeley. The Berkeley Unified School District (BUSD) granted Elan all of the necessary accommodations outlined in the Individualized Education Program (IEP). She continued to the middle school and high school fully mainstreamed with American Sign Language (ASL), and graduated from Berkeley High School one semester early.

In just three years, Elan obtained her undergraduate degree from University of California, Berkeley in African American Studies then proceeded to earn her Master's Degree in Education from Stanford University, graduating with a stellar 3.67 GPA.

"Life Is A Canvas" is Joy Elan's fifth published body of work, and first fiction. It is preceded by the highly revered books of poetry: "SIGNS OF LIFE: Past, Present and Future" (July 2011), "SILENCE IS NOT ALWAYS GOLDEN: A Poetic Revolution" (June 2013), "INSTITUTIONAL FREEDOM: A Collection of African American Studies Essays (Jan. 2015), " SILENCE IS NOT ALWAYS GOLDEN: The Power of Spoken Words (July 2015)."

Elan performs poetry live at venues throughout the San Francisco Bay Area. To learn more about Elan's story, her performances and her books, visit http://www.authorjoyelan.com.

Hearing appliances are not covered by medical insurances or Medicare. Though hearing screenings and medical application for hearing health is covered under the Patient Protection and Affordable Care Act (Obamacare), hearing aids are not required to be covered.

EDITORS:
A device aids Joy Elan's hearing, and her diction is sufficiently clear to give intelligible and fascinating broadcast interviews. To arrange in-person or telephone interviews with Ms. Elan, contact Toni Beckham | 209-832-8020