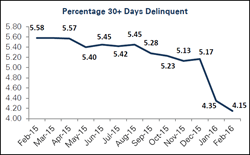 Trepp LLC, the leading provider of information, analytics and technology to the CMBS, commercial real estate, and banking markets, released its February 2016 US CMBS Delinquency Report today (available at http://info.trepp.com/thank-you-february-2016-cmbs-delinquency-report).

After an immense drop in January, The Trepp CMBS Delinquency Rate continued to improve in February. The delinquency rate for US commercial real estate loans in CMBS fell to 4.15% in February, a drop of 20basis points from January. The rate is also 143 basis points lower than the year-ago level.

“Despite the recent turmoil in new issue CMBS spreads, resolutions of delinquent loans continued apace in February,” said Joe McBride, Research Associate at Trepp. “The effects of the recent pain in new deal pricing may have a negative effect on the delinquency rate in the coming months as CMBS lenders pick their foot up off the accelerator, possibly pushing some marginal maturing loans into default.”

For additional details, such as delinquency status and historical comparisons, download the February 2016 US CMBS Delinquency Report at http://info.trepp.com/thank-you-february-2016-cmbs-delinquency-report. For daily CMBS commentary, follow @TreppWire on Twitter.

About Trepp
Trepp, LLC, founded in 1979, is the leading provider of information, analytics and technology to the CMBS, commercial real estate and banking markets. Trepp provides primary and secondary market participants with the web-based tools and insight they need to increase their operational efficiencies, information transparency and investment performance. Trepp serves its clients with products and services to support trading, research, risk management, surveillance and portfolio management. Trepp is wholly-owned by dmgi, a division of the Daily Mail and General Trust (DMGT).