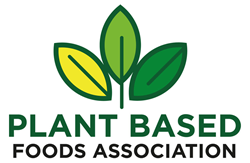 Every other sector of the food industry – from sugar to organics - is represented in the policy arena. The time has come for the plant-based food industry to also have a collective voice.

Today, 23 food companies announced the launch of the Plant Based Foods Association, the first trade group to represent the fast-growing plant-based foods sector, a $3.5 billion industry that supports consumer health and the environment. The association will engage in education, promotion, and advance policies to meet the increasing consumer demand for plant-based foods.

“Every other sector of the food industry – from sugar to organics - is represented in the policy arena,” said Michele Simon, executive director of The Plant Based Foods Association. “The time has come for the plant-based food industry to also have a collective voice.”

The association plans to educate retailers, food service professionals, and consumers about the myriad benefits of plant-based eating. Numerous health organizations such as the American Heart Association and international institutions such as the United Nations recognize the need to shift towards a plant-based diet, for both health and environmental benefits. The Johns Hopkins Bloomberg School of Public Health’s Center for a Livable Future recommends cutting back on meat not just for health and the environment, but also due to concerns for animal welfare, risks to workers, and antibiotic resistance. Consumers are increasingly heeding these recommendations.

According to newly-released data from SPINS, the leading retail sales data company for the natural and specialty products industry, the total market for this sector, (excluding data from Whole Foods Market) tops nearly $3.5 billion in sales. The category includes plant-based versions of meat, tofu, milk, yogurt, cheese and cream, and has grown more than 8.7% over the last two years. By comparison, general food and beverage sector growth has been just 3.7% over the same period.

Driving the growth are plant-based milks, which at $2.1 billion in sales have enjoyed 14.4% growth in total sales volume over the last two years. Plant-based meats, including meatless burgers, nuggets, tempeh, and tofu drives over $865 million in sales, with burgers representing the largest portion of the category, and tofu leading the growth at 7% over the last two years. With major advances in flavor and mouthfeel, plant-based yogurts, though still a smaller sub-category, have seen mighty growth, topping 12.7% over two years.

“Our data shows strong growth of this food sector,” said Kora Lazarski, SPINS’ strategic alliance manager. “With a new trade association focused on developing this industry further, we expect these figures will continue to grow in the coming years as new products are launched to meet consumer interest and demand.”

In Washington DC, the association is working with Elizabeth Kucinich, a leading advocate for healthy and sustainable food. Recently, Kucinich offered remarks to the U.S. Department of Agriculture on how the Dietary Guidelines for Americans should encourage shifting toward a plant-based diet to improve public health and help protect the environment. “Combined with the rising demands of conscious consumers, the Plant Based Foods Association can help shift public policy towards a better, more sustainable food system,” she said.

“In the next five to ten years, we are going to see a massive explosion of interest in plant-based foods. We are going to see many new companies and many success stories,” said Jaime Athos, CEO of The Tofurky Company and board president for the Plant Based Foods Association.

About the Plant Based Foods Association

The Plant Based Foods Association represents the nation’s leading plant-based food companies. We educate about the benefits of moving toward a plant-based diet, and advocate for better policies to meet the growing consumer demand for plant-based foods. Founded in 2016, its members represent a $3.5 billion market category that supports consumer health and the environment. Learn more at: http://www.plantbasedfoods.org and follow us @growplantbased.