She and three of her works ("Cotswalds #1," "Footsteps #3," and "Tracks in the Sand") have been invited to this summer's Pastel en Périgord exhibition in Dordogne, France. 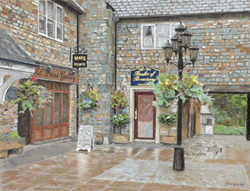 Linda Gross Brown and her paintings "Cotswalds #1," "Footsteps #3," and "Tracks in the Sand" have been invited to Pastel en Périgord.

With her masterly technique and impressive body of work, it seems natural that Linda Gross Brown's paintings are catching audiences' eyes and imaginations around the world.

The works of award-winning American pastel painter Linda Gross Brown again have again caught attention abroad, this time in France. On January 2, Linda and her pastel paintings "Cotswalds #1," "Footsteps #3," and "Tracks in the Sand" have been invited to Pastel en Périgord's summer exhibition Salon International de Pastel de Saint-Aulaye in the village of Saint-Aulaye in Dordogne, France.

This is not the first occasion in recent times that Linda's art has found recognition in the country. Linda was a finalist by invitation in the same exhibition in 2014. Her work has also been showcased in the French art magazine Pratique des Arts, including their Winter 2015 publication and a June 2010 special issue focusing on pastel artists around the world. Additionally, in 2011, Linda was invited to an international juried pastel exhibition in Giverny, France.

Perhaps Linda's appreciation among French fine art lovers in particular stems from the mastery of color, light, and shadow that she exhibits in her pastel paintings and which can call to mind the works of Impressionists such as Monet, though her style remains her own. As the artist herself expresses, "By harnessing the energies that exist within the four boundaries of the picture frame, and with careful manipulation of tone, color, value and subject, a landscape evolves with a special luminescence that invites the viewer to wander along a predetermined pathway through the work."

In addition to winning recognition abroad, Linda's foothold in the U.S. remains firm. Her "Footsteps #15" was just juried into the 2016 Great Lakes Pastel Society National Exhibit, running May 19 - July 16, 2016.

With her masterly technique and impressive body of work, it seems natural that Linda Gross Brown's paintings are catching audiences' eyes and imaginations at home and around the world. Whatever further achievements develop as 2016 unfolds, it is certain that Linda will continue to draw followers and to leave her mark in the art world.