From New York’s Lower East Side to all four corners of Hollywood, Luis has appeared in over 100 films. 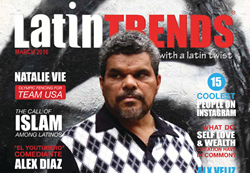 Luis Guzman, this month’s LatinTRENDS cover personality, has appeared in hit shows like “Oz” and “Narcos,” as well as big screen blockbusters like “Carlito’s Way” and “Boogie Nights.” Yet, these titles are mere specks in Guzman’s lengthy repertoire of over one hundred films.

In an exclusive interview with LatinTRENDS, Luis talks about his early career as a social worker and how he worked his way to superstardom. Guzman’s latest film is a comedy, “Keanu,” starring Key and Peele, featuring Method Man, Nia Long and Will Forte and opens in theaters April 29.

LatinTRENDS also features an exclusive interview with Eugenio Derbez, where he discusses his experience in entertainment and positive portrayals of Latinos in film. He tells us, “In general, I want my films to be inspirational and improve the image of our people.” See Derbez and Jennifer Garner in “Miracles from Heaven” in theaters now.

Also, see in-depth reporting on important topics in “The Rise of International Students in the U.S.,” “Prescription Drug Ads Ban,” and “The Call of Islam among Latinos.”