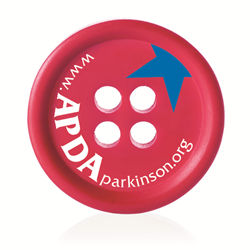 April is Parkinson’s disease Awareness Month and the American Parkinson Disease Association (APDA) is proud to announce its brand new APDA Red Button campaign that will bring to light to how basic everyday tasks (such as buttoning a shirt) become increasingly difficult for people with Parkinson’s disease (PD) and focus on health and wellness for those living with PD and their care partners. A red button will serve as APDA’s unique symbol for the month and starting April 1, supporters can visit http://www.apdaparkinson.org to get their own virtual red button and share buttons with others. Throughout the month, the APDA website will feature a new action each day for those who want to make a positive impact on the lives of those who battle this disease.

Every nine minutes there is a new diagnosis of PD, which means that in April alone nearly 5,000 individuals in this country will learn they have PD. Parkinson’s disease is a chronic, progressive disease with no treatment, therapy, or drug to slow or halt its progression. “Imagine if one day, you couldn’t button your shirt by yourself, or pour a cup of coffee, or write a check,” states APDA President and CEO Leslie A. Chambers. “For many people living with PD, these are real challenges they are facing every day, or may face in the future. APDA’s Red Button campaign will capture attention and start important conversations about PD as we strive to educate more people about this disease, what symptoms to look for, how to help those living with it, and how to support APDA as we work hard to put an end to PD.”

For more than 50 years, APDA has led the charge as the nation’s largest grassroots organization serving the needs of those touched by Parkinson’s. The support of the general public is crucial and April is the perfect time to take action that can help the more than one million people in the United States coping with this neurological movement disorder and also fund research that will lead us to a cure.

Visit http://www.apdaparkinson.org every day in April to discover interactive ways to change lives such as sharing an APDA Red Button via social media, sharing personal stories of optimism, learning ways to achieve the best quality of life in spite of a diagnosis, gain access to helpful resources, or make a critical donation to help fund APDA’s dual purpose to Ease the Burden – Find the Cure.

Actions you can take will be showcased on the APDA website throughout the month and can bring hope and optimism to individuals and families touched by Parkinson's disease:

American Parkinson Disease Association (APDA) was founded in 1961 with the dual purpose to Ease the Burden - Find the Cure for Parkinson’s disease. In that time, APDA has raised and invested more than $87 million to fund research, patient services and education, and elevate public awareness. As the country’s largest Parkinson’s grassroots organization, APDA is here to serve the more than one million Americans with Parkinson’s disease and their families through a nationwide network of Chapters, Information and Referral (I&R) Centers, and support groups. APDA also funds Centers for Advanced Research and awards grants to fund the most promising research toward discovering the cause(s) and finding the cure for Parkinson’s disease.