Inaugural Issue Discusses "If Housing Markets Are Recovering, Why Is the Homeownership Rate Still Falling?" 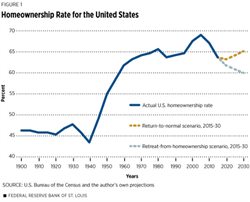 This marks the 11th consecutive year of decline and brings the homeownership rate back to the level it first reached in 1968.

The St. Louis Fed's Community Development department has released a new online publication featuring analysis from St. Louis Fed economist and assistant vice president Bill Emmons as part of its quarterly Housing Market Conditions report. The inaugural issue of "Housing Market Perspectives – On the Level with Bill Emmons," looks at the question of why home ownership rates in the U.S. are at their lowest levels since 1968, despite historically low mortgage rates and rising employment.

Emmons noted the following improvements in the U.S. housing market in 2015:

Nonetheless, amidst these improvements, "one important gauge of housing conditions continued to fall in 2015—the homeownership rate," Emmons said.

“This marks the 11th consecutive year of decline and brings the homeownership rate back to the level it first reached in 1968,” he added.

While a significant drop, he noted that a homeownership rate above 50 percent was unprecedented before post-World War II political and social changes turned the U.S. into a predominantly home-owning society. In addition, until the late 1990s, the rate hovered for close to three decades within a narrow range between 63 percent and 66 percent.

"This still might be the range to expect in the future," Emmons said. “Conversely, homeownership could keep falling from here rather than stabilize."

"It’s too soon to judge whether a long 20-year cycle is nearing its end (the return-to-normal scenario) or we are in the midst of a secular decline that could drive the homeownership rate even lower (the retreat-from homeownership scenario)," he said. "Perhaps there are elements of both explanations at work. In any case, it appears unlikely that the U.S. homeownership rate will return to its historic peak of 69 percent anytime soon."