Ambassador Jilani to host the Pakistan Day festivities with Recording Artist Heather Schmid performing the popular Unity Song. The evening will honor the Pakistani/American collaboration as an example of successful music diplomacy. 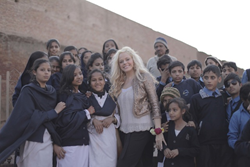 Ambassador Jilani to host the Pakistan Day festivities with Recording Artist Heather Schmid performing the popular Unity Song. The evening will honor the Pakistani/American collaboration as an example of successful music diplomacy.

Phelay Hum Pakistani Hain fused American pop rhythms with Pakistani regional instruments, and local musician melodies. Celebrating Pakistani musicians, instruments and traditions by bringing them to a wider audience through the medium of pop music, the Unity Song reached every corner of Pakistan through radio, TV, Internet, local and national events. Ms. Schmid’s performances and interviews on TV in Pakistan are appreciated as symbols of Music Diplomacy between the nations.

During the summer of 2013, a highly tumultuous time with many security concerns in Pakistan, Heather and Rafay Mehdi traveled to rural villages in Pakistan. Heather Schmid recorded the musicians playing and performing in their village with their instrument, then added the part to the final song back in Los Angles while mixing and mastering.

The Unity Song was released with a Music Video on August 13, 2013 by every major media outlet. The Pakistan National Holiday was celebrated by live performances with Heather Schmid and Pakistani musicians live and on TV throughout the country.

The overall sentiment of Pakistani citizens in the country and worldwide was of gratitude for celebrating the music and musicians in Pakistan. Sharing the positive collaborating between Pakistani legend musicians and American GRAMMY recording artist Heather Schmid allow the listeners to embrace and emulate this musical diplomacy. The reaction from the people of Pakistan have been almost universally grateful and positive, earning her the informal title of Music's Global Ambassador.