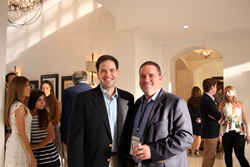 America may very well get a second chance to reconsider the Honorable Sen. Marco Rubio at the convention.

One day after the latest terrorist attack in Brussels, in which 31 people were killed by 4 suspects and 9 Americans were among the hundreds wounded at air and rail hubs, the Chairman of the Small Business in Transportation Coalition ("SBTC") issued a statement looking forward to a possible brokered Republican convention and challenging all unbound delegates to choose the Honorable Marco Rubio as the Republican Nominee for President.

"Although our main emphasis is usually on polices that promote and protect the interests of small business in the transportation industry, and clearly Marco Rubio has earned the respect of our members in that area, as mostly American business owners, our focus must be balanced between finding a candidate who protects small business and the economy, on the one hand, and, on the other, choosing the right foreign policy expert to make an economy possible in the first place," SBTC Chairman James Lamb said. "With Senator Rubio's decision to 'suspend' his campaign, we are left with unbearable choices.

"I therefore encourage all Americans who have yet to vote in their states primaries to block Donald Trump from reaching the 1,237 delegate mark by voting for Cruz in the remaining winner-takes-all states, vote for Rubio in the remaining proportional states, and ask all Americans to please consider signing our petition to draft Senator Rubio at the Convention," Lamb added.

Whereas, mathematically, it appears virtually impossible that any Republican candidate will receive the requisite 1,237 delegates needed to secure the 2016 Republican party presidential nomination; and

Whereas, we the members of the Republican party believe the Honorable Marco Rubio remains the best and most qualified candidate to defeat the Democratic nominee;

Now, be it hereby resolved that we the members of the Republican party hereby request that any and all unbound delegates elect Marco Rubio as our nominee; and

Be it further resolved the party remove any and all barriers and suspend or eliminate any and all rules that interfere with such ability of said unbound delegates to vote for Marco Rubio as the nominee.

Americans wishing to join Lamb's campaign to draft Senator Rubio at the Convention can find the Petition here.

"It's still not too late to put America back on track. America may very well get a second chance to reconsider the Honorable Sen. Marco Rubio at the convention, and I really hope we do for America's sake," Lamb said.

ABOUT SBTC
The SBTC is an international network of transportation professionals, associations, and industry suppliers that is on the front lines when it comes to issues that affect transportation professionals in small business. We seek to promote and protect the interests of small businesses in the transportation industry. We support teamwork, cooperation, transparency, and partnerships among truckers, carriers, brokers, and shippers and seek to promote ethical business practices and do business with the utmost integrity.