The Jackson Hole Fall Arts Festival has selected Colorado artist Edward Aldrich as featured artist for the annual event taking place in Jackson, Wyo., Sept. 7 – 18, 2016. Aldrich’s oil painting “Greeting the Dawn,” which portrays bison roaming beneath the Tetons on an early Wyoming morning, will grace the official posters and be auctioned on the Jackson Town Square Sept. 17. 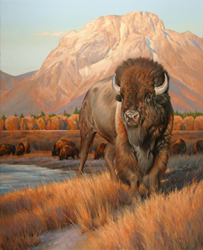 The overall effect was created to have light, space and the ‘feel’ of a time of day, as well as the presence and intensity of this magnificent animal.

A majestic bison roams the Wyoming wilderness against a Tetons backdrop in the early morning in “Greeting the Dawn” by artist Edward Aldrich. The 64” x 52” oil painting by the Colorado wildlife artist has been selected by the Jackson Hole Fall Arts Festival as its featured artwork for this year’s event, Sept. 7 – 18, 2016. The Aldrich painting will appear on the popular Jackson Hole Fall Arts Festival poster for the 2016 event, available for purchase and considered an art collectible in its own right. The painting itself will be on display in the lobby of The Wort Hotel leading up to the festival and offered for auction following the annual QuickDraw event on Jackson Town Square on Sept. 17, 2016.

An award-winning painter known for his lifelike depictions of wildlife from around the world, Edward Aldrich claims finding inspiration in representational artists as diverse as Bob Kuhn, Andrew Wyeth and John Singer Sargent. Aldrich lives in Golden, Colo., but has often traveled to Wyoming to paint wildlife in its natural habitat. He is also a longtime artist participant in the National Museum of Wildlife Art’s Western Visions, a signature event of the Jackson Hole Fall Arts Festival.

“This image allowed me to explore the rich colors of the first rays of sun on a landscape. I was inspired by that incredibly warm sunlight and how the low rays describe the form of the landscape and animals,” says Aldrich of his “Greeting the Dawn.” “The main presence of the bison is intentionally framed by the mass of Mount Moran, and though he is front and center, I wanted him to be part of a group. The overall effect was created to have light, space and the ‘feel’ of a time of day, as well as the presence and intensity of this magnificent animal.”

A graduate of the Rhode Island School of Design, at age 26 Aldrich was juried into the Society of Animal Artists where his work is frequently included in their annual exhibition “Art and the Animal.” Aldrich’s work is in the permanent collection at the Leigh Yawkey Woodson Art Museum and he has frequently been accepted into their prestigious “Birds in Art” show. Aldrich’s paintings also have been included in such national shows as the Gilcrease Museum Miniature Show, the Western Heritage Museum Small Works Show and the Oil Painters of America National Show. A book of his work written by Aldrich, "Drawing and Painting Animals" (Watson/Guptill, 1998), features more than 100 of his paintings and drawings. He is represented by six galleries in the U.S. and Canada.

Now in its 32nd year, the Jackson Hole Fall Arts Festival features more than 50 family-friendly events over the course of 12 days – including gallery openings featuring top Western painters and sculptors, spectacular home and ranch tours, art auctions and food and wine tastings and more. The popular event is a haven for art, culture and design enthusiasts during a spectacular season in this special Mountain West town.

Edward Aldrich, an award-winning painter known for his lifelike wildlife paintings, will be the 32nd Featured Artist of the Jackson Hole Fall Arts Festival.

Many events of the Jackson Hole Fall Arts Festival such as the QuickDraw competition and the Art Auction occur on Jackson Town Square framed by naturally shed elk antler arches.

September in Jackson is an inspiring time with long days and comfortable climates for visitors and art enthusiasts to enjoy the many outdoor activities of the Jackson Hole Fall Arts Festival.