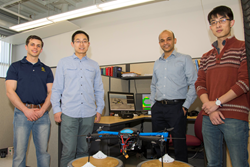 A Worcester Polytechnic Institute (WPI) professor has received an 18-month, $185,000 grant from the U.S. Air Force for research exploring how unmanned aerial vehicles (UAVs) can be operated safely, reliably, and intelligently even when they experience mechanical problems or encounter other unexpected situations.

Raghvendra V. Cowlagi, assistant professor of mechanical engineering and aerospace engineering, received the grant in collaboration with Aurora Flight Sciences Corp., a leader in the manufacturing and design of optionally piloted and unmanned aircraft.

The research can be applied in UAVs used in military and civilian applications, including those designed for search-and-rescue missions.

UAVs are designed to fly under the control of a human pilot on the ground. However, a loss of communications and/or onboard contingencies, such as engine problems or undetected structural damage to the airframe, can impair the ability of a UAV to complete its mission. UAVs operated by the Air Force include the General Atomics MQ-1 Predator, which has a wingspan about one-quarter the size of a Boeing 747 and can carry about 450 pounds of payload.

Even when communications are not interrupted, the large volumes of data transmitted by UAVs operated by the Air Force— including aircraft health, positioning, weather, and other factors—can overwhelm pilots during emergencies, making it difficult to assess the true nature of the situation.

“This could lead to accidents or the aircraft may not be able to operate in an optimal way,” Cowlagi said.

To address the challenge, Cowlagi and his research team are developing algorithms to run on a UAV’s onboard computer that will allow the aircraft to perform high-level missions with minimal human supervision or remote piloting, while also enabling the vehicle to tolerate severe degradation to the airframe and engines. The algorithms will also help remote pilots parse the vast amount of information transmitted by UAVs to gain a better understanding of the vehicle’s condition.

“We’re trying to determine what types of intelligent algorithms we can put on board the aircraft that can deal with these sensor inputs,” said Cowlagi. “We’d like the UAV to be able to do a lot of the computations on board and take care of these contingencies before communicating back to the pilot.”

Cowlagi stressed that the remote pilot will still be the supervisor, but the algorithms will take much of the burden of real-time decision making off of pilots. “A lot of the decision making that might have gone on in a pilot’s head will now go on board the UAV, and we think this will lead to safer operation of UAVs in the future,” he said.

In building the algorithms, Cowlagi said his team is using a novel method based on linear temporal logic (LTL) specifications. LTL is a logic system that allows the human supervisor to command the UAV, and impose safety behaviors on the UAV, all in a unified human-friendly format. The challenge, which is being addressed by Cowlagi’s research, is to design algorithms that can ensure that the UAV diligently follows these commands from the human supervisors, while accounting for health degradations in the airframe structure and/or engines.

“This research has never been used before in the context of unmanned aerial vehicles,” said Cowlagi. “We are the first group to try this and to try to apply this method in the hopes of making UAVs safe and reliable.”

Aurora leaders are pleased with the partnership with WPI.

“The collaboration between Aurora and WPI is producing exciting results, proving that self-aware and self-reacting UAVs are obtainable in the not-too-distant future,” said Jeffrey Chambers, composite structures research engineer and project lead at Aurora. “Aurora provides expertise in UAVs and helps formulate the research statement, while WPI provides novel concepts to address the operational obstacles at hand.”

Other researchers working with Cowlagi on the project are graduate students Zetian Zhang, Benjamin Cooper, and Ruixiang Du, who are conducting doctoral research under Cowlagi’s supervision.

This grant builds on previous U.S. Air Force–funded research Cowlagi has conducted in collaboration with Aurora. In particular, the feasibility of the current research was demonstrated in early 2015 through preliminary results obtained by Cowlagi and his team.

Earlier this year, Cowlagi received a Young Investigator Award from the Air Force Office of Scientific Research for a research project focused on data-driven control for UAVs.