The Lawsuit Alleges 'The Last Witch Hunter' Violates Edwards’ Copyright in regard to her script, ‘WITCH.’ 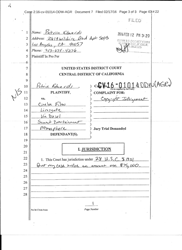 The lawsuit alleges that producers hired screenwriters to rewrite the script ‘WITCH’ and it was subsequently renamed “The Last Witch Hunter.” Vin Diesel, Lionsgate, Atmosphere, Cinelou Films and Summit are named as defendants in the complaint filed on February 23, 2016 in the United States District Court, Central District of California, Case No. 2:16-cv-01014-ODW (ARGx).

The complaint alleges that Kely Lyons took the idea for The Last Witch Hunter from Edwards’ 2012 script, short film footages, movie trailer and 2014 outline titled ‘WITCH,’ and gave it to the producers to raise money on TGCfund.com, where film investors often visit. The lawsuit seeks $20 million in damages.

The lawsuit alleges the scripts have a similar premise. According to court documents, both scripts feature a bald character whose wife and child are killed by witches, and spends years hunting down witches.

The Defendants' attorney David Aronoff at Fox Rothschild is representing them. Patrice Edwards, the plaintiff is pro se, self-representing.