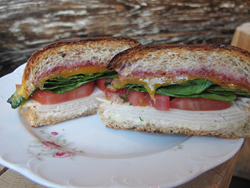 School kids will have fun with healthy ingredients and test their creativity in a Sandwich Showdown.

Amy’s Bread is teaming up with an acclaimed New York chef to help underserved children while delighting foodies. The newest offering, part of the Amy’s Bread Chef Sandwiches for Good program, will feature Galen Zamarra and benefit After-School All-Stars (ASAS), which offers enrichment activities for children in low income communities.

In collaboration with top chefs, New York’s Amy’s Bread has found a creative way to help those in need. The Amy’s Bread Chef Sandwiches for Good campaign, launched in March, features a new sandwich each month created by a noted chef who selects a charity to receive a portion of the proceeds. April’s sandwich is the All-Star Turkey Cheddar Melt by Chef Galen Zamarra of Mas (farmhouse) and Almanac.

Along with the introduction of the new sandwich, Amy’s Bread and Chef Zamarra have found a creative way to encourage kids to eat healthy foods. Twenty students will take part in a “Sandwich Showdown” on April 21 at The Dual Language Middle School where, in a race against the clock, they’ll compete to make the best sandwich, using a variety of breads and healthy ingredients. Competitors will also get a lesson on nutrition from Zamarra and Amy’s Bread founder and owner Amy Scherber. The students are part of the ASAS MasterChef program, where they are exposed to new foods through lessons, culinary excursions and guest teachers. The event is open to the public on a first-come, first-serve basis. For more information and to RSVP to the Sandwich Showdown, contact ASAS at NewarkNY(at)afterschoolallstars(dot)org.

"I'm honored to partner with Amy’s Bread to support After-School All-Stars,” said Galen Zamarra. “We’re excited to help bring greater awareness of healthy eating to kids in an after-school activity that could potentially lead to a culinary career. The Sandwich Showdown will give the kids an opportunity to work with quality, healthy ingredients in a fun and creative way, and we hope they’ll use that creativity in their own daily lives.”

“We’re humbled and thrilled to have been selected by Chef Galen and Amy’s Bread to participate in such a unique opportunity,” said Dax-Devlon Ross, ASAS NY/NJ Executive Director. “Creative campaigns like this raise much needed awareness for our work and send a positive message to our kids about eating healthy and giving back.”

Food lovers can look forward to more delicious offerings by top chefs. Each sandwich will feature at least one ingredient from The Pantry by Amy’s Bread and be served on Amy’s bread. The sandwiches will be sold at all Amy’s Bread locations as well as at The Pantry by Amy’s Bread. Future offerings will be created by chefs David Bouley, Lynn Bound, Alex Guarnaschelli, Anita Lo, Missy Robbins, Bill Telepan and others to be announced at a later date.

About Amy’s Bread (@amysbread)
Founded in 1992, Amy’s Bread is a pioneer of the artisan baking movement in New York City. Everything is made by hand, using slow fermentation and traditional baking methods. With retail shops in Hell’s Kitchen, Chelsea Market and Greenwich Village, kiosks at The New York Public Library (42nd Street and Performing Arts Library at Lincoln Center) and a production kitchen in Long Island City, the company specializes in traditional breads as well as sandwiches, sweets, and old-fashioned layer cakes made with the freshest natural ingredients. Amy’s Bread supplies more than 200 of the city’s top restaurants and specialty food stores and also offers online catering, local deliveries and shipping nationwide.

About Galen Zamarra (@galenzamarra)
Galen Zamarra’s Mas (farmhouse) opened to immediate acclaim in 2004, and he has also found success with Almanac, a micro-seasonal fine dining establishment with dishes inspired by his personal culinary journal. He’s been honored by the James Beard Foundation and featured on the Discovery Channel’s “Go Ahead, Make My Dinner” as well as on the Food Network program “Chopped.” Zamarra is active in a variety of community organizations aimed at encouraging healthy eating through sustainability and the use of locally grown and fresh ingredients.

About After School All-Stars (@ASAafterschool)
After School All-Stars (ASAS) is a leading national provider of year-round, school-based, comprehensive after school programs. The organization’s mission is to keep children safe and help them succeed in school and in life. Every school day, students in low-income communities have access to free programs that offer academic support, enrichment opportunities, and health and fitness activities. For more information, visit http://www.as-as.org.