Two Tampa dads have invented Sense A Life, a device using Smart Sensor Technology. This wireless device installs in under 30 seconds and will help prevent fatalities and injuries to children that are left unattended in vehicles. 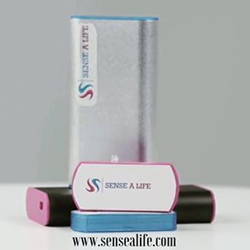 Sense A Life can help Save A Life!

As we head into warm-weather seasons, parents are reminded of the tragedies that occur each year when small children are accidentally left in hot cars.

Two dads from Tampa, Florida have developed a product which they say will prevent hot car fatalities and give parents peace of mind. It’s called Sense-A-Life — an easy-to-use device that alerts parents if they’ve left their children in the car, through a built in speaker and their mobile phone.

Neighbors Jim Friedman, an electrical engineer, and Fadi Shamma, a pharmacist, came up with the idea for Sense-A-Life while their children were playing together. Shamma told The Huffington Post that Friedman was talking about some of the engineering side projects he likes to do outside of work. During the same conversation, the parents discussed the many stories they’d read about children who lost their lives when left in hot and cold cars.

For Shamma, something clicked. “I said to Jim, ‘You’re an engineer, here we have a problem, and I bet we can come up with a very good solution.’”

Their solution is Sense-A-Life — a wireless and bluetooth-powered system that involves sensors, pressure meters, car speakers and a cell phone app.

A baby sensor in the form of a small seat pad activates the system when it detects a child in the car seat. It requires only two pounds of pressure to activate. Another sensor device goes under the driver’s seat.

Sense-A-Life detects when the driver exits the vehicle and sends an audible message and phone app alert to the driver stating, “Please remove the child from the seat.” If the driver doesn’t respond to the app or remove the child within a few minutes, Sense-A-life can send an alert to a second parent or caregiver. “We want to have a lot of back-up plans,” said Shamma.

Shamma says what distinguishes Sense-A-Life from the many other products that have been developed to prevent hot car deaths is its simplicity, practicality and ease of use.

“Installation takes less than 30 seconds,” he said, adding that unlike other similar products, the device requires no extra wiring, no messing with the makeup of the car and doesn’t use a key fob system that triggers an alarm when parents walk a certain distance from the car. The latter method, he explained, can lead to many false alarms.

After heavily testing Sense-A-Life through clinical trials, consultations with safety experts and stress testing, Shamma is proud to report they’ve developed a functional product. As of now, they have a market-ready prototype and are in talks with manufacturers to go forward with mass production.

Currently working with limited funds, the dads hope to raise enough money for production through a Kickstarter campaign set to launch on April 6, 2016.

Shamma, whose wife is a pediatrician and often sees children admitted to the emergency room for heat and hypothermia-related issues, believes it’s important to face the reality of the problem.

“It really does happen,” he said, noting that in addition to the many reported hospital visits, numerous near-fatal incidents go unreported because parents are too embarrassed or afraid of potential Child Protective Services alerts to bring their kids to the hospital. The stigma against parents who have forgotten their children is powerful.

But, said Shamma, “Parents do make mistakes. We’re all human.”

“We live in a world full of distractions,” he added. “We’re always on our telephones, we’re tired, we’re constantly being asked to do a hundred things at the same time ... And newborns aren’t always visible in their rear-facing car seats.”

“All it takes is that one slip,” he continued. “In five minutes, the body temperature of a child can go up 10 or 20 degrees. They’re very sensitive.”

Although parents are often involved in these cases, there are are also many instances when it happens under the care of babysitters, nannies, grandparents or other relatives, the dad noted, highlighting the many working parents and single parents in the USA today.

Sense-A-Life is also meant to 'provide peace of mind' to those parents. “We all need a simple reminder,” he said, comparing their system to the dinging sound many cars make when the driver doesn’t buckle his or her seatbelt.

Ultimately, Shamma and Friedman want Sense-A-Life to be a standardized feature in all car seats. For now, they’re working toward selling it as a standalone device at a reasonable price so that all parents can afford it.

Said Shamma, “Even if it saves one life or prevents one hospital visit, it’s worth it to us.”

To learn more about Sense-A-Life & to support their Kickstarter Campaign: visit http://www.sensealife.com