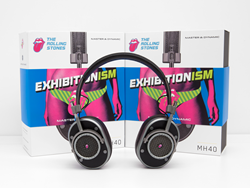 As 2016 unfolds, New York City-based premium audio company Master & Dynamic continues to make noise with its growing line of headphones and earphones. Now, the luxury brand known for following its own path has joined forces with some of the music world’s most well-known trendsetters: The Rolling Stones. The iconic rockers commissioned Master & Dynamic to create the first ever Rolling Stones headphones, which are available for $500 at the band’s Exhibitionism exhibit at Saatchi Gallery in London today through September 4, 2016.

A collection of memorabilia that includes items from The Rolling Stones’ fifty-plus-year history, the Exhibitionism Tour features over 550 rare and original Rolling Stones objects, a room containing a three minute audio-visual journey on 40 screens and a recreated flat shared by Mick Jagger, Keith Richards and Brian Jones in the early 1960’s. Other well-known brands such as Smythson, Turnbull & Asser and Superga have also unveiled products bearing the iconic Rolling Stones logo, all of which can also be purchased at the exhibit.

True to Master & Dynamic’s commitment to form and function, the stellar sound quality of the headphones remains unchanged, while the group’s lip logo has been added to the inside and outside of each ear cup; the product’s packaging has also been surrounded with a custom wrap commemorating the exhibit.

After spending six months in the UK, the exhibit will make its way around the globe, stopping in 11 international cities such as New York and Tokyo, giving the band’s millions of fans a chance to explore the fully immersive, multi-media experience.

Thus far 2016 has seen Master & Dynamic add projects with The Rolling Stones and Japanese designer Poggy to its resume, along with the new Palladium ME05 Earphones, which Hypebeast praised for their “first class audio capabilities.” The brand’s commitment to excellence earned it high marks in 2015 as well, with the release of a number of highly rated new products and designs such as the MW60 Wireless Over Ear Headphones, the brass ME05 Earphones, the silver/white colorway, Alcantara edition headphones and limited edition custom hand-painted headphones all debuting before the end of the company’s first full year. For more information on Master & Dynamic, visit http://www.masterdynamic.com.

Master & Dynamic is a premium audio brand obsessed with sound and creativity. It is a New York City-based company with a deep passion for building beautifully crafted, richly appointed, technically sophisticated sound tools for creative minds. Its collection of headphones are tuned to provide a rich warm sound that perfectly captures the exceptional detail of well recorded music. Master & Dynamic sees its headphones as modern thinking caps: tools to help focus, inspire and transport your mind. Designed for decades of use, Master & Dynamic products are engineered to last, utilizing only the finest materials such as premium leathers and stainless steel, which create the perfect balance of aesthetics, strength, comfort and sound. View the entire collection at http://www.masterdynamic.com.