Advocate who lost his young daughter to brain cancer shows ASPIREist TV host Environmentalist Philippe Cousteau the toxic waste site across from where she lived and played and why it is one of the deadliest sites in the U.S. and the world (Segment "Episode 2: "Ghosts of Fort Detrick" airs Sunday April 10th at 8:00 a.m. EST on USA Network) 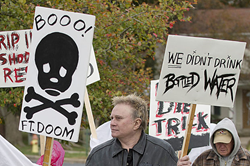 Staff file photo by Bill Green. Supporters of Kristen Renee Foundation and Founder Randy White, center, gathered to remember those who died of cancer after living near Fort Detrick.

Hosted by celebrities including George Clooney and environmentalist Philippe Cousteau, Jr., the grandson of explorer Jacques Cousteau, ASPIREist TV (http://www.aspireist.com) launched April 3, 2016. Cousteau travels to Frederick, Maryland to interview White and probe the secrecy of Fort Detrick’s past, and the alarming numbers of cancer cases and diseases in young people who live or have lived in the area surrounding Fort Detrick’s landfill, known as “Area B”. Fort Detrick from the 1940’s to the 1960’s was the hub for the U.S. biological weapons program.

The Kristen Renee Foundation announces that Randy White, Founder/President of the Kristen Renee Foundation and its “Fighting for Frederick” project, will appear on ASPIREist TV on the USA Network this Sunday, April 10th at 8:00 a.m. (EST). ASPIREist (http://www.aspireist.com), premiered April 3, 2016, and is a magazine format news show hosted by celebrities including George Clooney and Philippe Cousteau, environmentalist and grandson of legendary explorer Jacques Cousteau.

In Episode 2: “Ghosts of Fort Detrick”, White, a former Frederick, Maryland resident who lost his daughter Kristen Renee to brain cancer in 2008, shows Cousteau the Superfund and NPL site and the community that surrounds it. They discuss how losing his daughter Kristen Renee to non-genetic brain cancer, led him to research the neighborhood where she grew up. White and his team discovered that Fort Detrick’s Area B had become an EPA Superfund site and put on the National Priority List the year Kristen died.

White tells Cousteau how their lives turned upside down as they found a community filled with cancers – 57 cases on a single street, and as many as 11 members diagnosed with cancer in the same family; and all surrounding Fort Detrick’s Area B. White and his team launched a privately-funded groundwater contamination investigation. What began with one cancer case, became 25, then 400. Now nearly 1,200 cancer victims and families of those who died, are registered with the Kristen Renee Foundation.

In Sunday morning’s documentary, “Ghosts of Fort Detrick” White leads a group in a “Ghost Walk” through the streets of Frederick as Cousteau and his crew capture the event, and interview members of the community.

ABOUT THE KRISTEN RENEE FOUNDATION – Accomplishments include:
1. Urged the signing of the FFA (Federal Facility Agreement)
2. Have met with Senator Mikulski, Senator Cardin’s and other legislative offices urging clean-up of Fort Detrick and surrounding area.
3. Presented our findings to the Maryland Senate Finance Committee and National Academy of Sciences which incorporated KRF data into its NRC Assessment report on Area B.
4. Created an amendment to the Maryland Cancer Research Bill in State Senate that was signed into Maryland State Law.
5. Nearly 1,200 victims are registered in our Foundation's Cancer Cluster Survey; and 14,000 supporters join Randy and the Foundation’s efforts to ensure that Fort Detrick holds to task of total clean-up of the Superfund and NPL site according to the Federal Facility Agreement.

Through http://change.org/ghosts, Randy White and 14,000 others are asking Congress to “create and enact legislation immediately to clean the chemical repositories at Fort Detrick and compensate the affected.”