The participating teams and dates for the MoneyGram SocioMX Cup 2016 were announced in a press conference held in Dallas, TX. 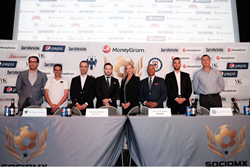 Founders of Sports Marketing Monterrey, Executives of MoneyGram, Presidents and Directors from Clubs

'SocioMX resonates with millions of Latinos in the US by bringing elite soccer events for families and friends across the nation,' said Javier Villalobos, Sports Marketing Monterrey’s President/Founder.

“Our money transfer services unite friends and families just as sports have a way of uniting loved ones,” says Juan Agualimpia, MoneyGram’s Executive Vice President and Chief Marketing Officer. “This passion for creating significant connections and bonds is one reason we are proud to be a sponsor of SocioMX and the quality competition it brings to the U.S. Through SocioMX games, our customers can experience all of the excitement that soccer brings.”

“It is always a pleasure to be a part of the SocioMX Cup since it is a way to bring us closer with Cruz Azul’s fans in the United States,” commented Ing. Guillermo Alvarez, Cruz Azul’s Chief Operations Officer.

As the presenting sponsor, Coors Light will tap into the excitement of fans and celebrate the achievements of these incredible athletes by bringing unique consumer engagement activations.

The first semifinal Cup match will take place at Avaya Stadium in San Jose, CA, July 2nd between Pumas UNAM and Club Santos Laguna. The second semifinal Cup match will take place at BBVA Compass Stadium in Houston, TX, July 3rd between Cruz Azul and CF Monterrey. All participating teams will be playing in the double-header championship match at The Cotton Bowl Stadium in Dallas, TX, on July 6th to determine the champion of the Cup. The Tour will kickoff with a match at Los Angeles Memorial Coliseum Stadium in Los Angeles, CA, on June 29th between Cruz Azul and Club Tijuana Xoloitzcuintles. The MoneyGram SocioMX Cup/Tour presented by Coors Light is set to capture millions of television viewers via Univision in the United States and internationally via ESPN in 21 countries.

SocioMX, along with its sponsors, will host the most prestigious Mexican tournament in the United States with renowned elite teams.

“SocioMX resonates with millions of Latinos in the US by bringing elite soccer events to families and friends across the nation,” said Javier Villalobos, Sports Marketing Monterrey’s President/Founder.

Player appearances among other exclusive experiences will be offered to fans. These special opportunities will enable fans to meet and connect with elite players from their favorite Mexican teams.

For more information on the SocioMX Cup, please visit http://www.socio.mx

About SocioMX
SocioMX is a platform that enables fans to interact and connect on a deep level with their favorite Clubs in multiple ways, from digital, merchandising and experiential marketing.

The agency currently represents over 47 professional athletes worldwide and promotes professional soccer match games with elite teams from Mexico and South America, among having the exclusive rights of elite soccer teams in United States for marketing, merchandising, match games, among other categories.

About MoneyGram International, Inc.
MoneyGram is a global provider of innovative money transfer and payment services and is recognized worldwide as a financial connection to friends and family. Whether online, or through a mobile device, at a kiosk or in a local store, we connect consumers any way that is convenient for them. We also provide bill payment services, issue money orders and process official checks in select markets. More information about MoneyGram International, Inc. is available at moneygram.com.

MoneyGram and the Globe are marks of MoneyGram.
©2016 MoneyGram